G8 protesters to shout out loudly for a fairer world 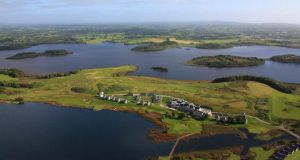 The G8 summit is being held in Co Fermanagh next week 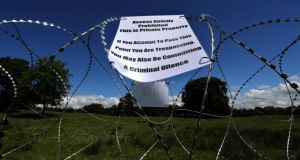 Razor wire which has been laid in fields near the Lough Erne resort in County Fermanagh, the venue for next week’s G8 Summit. Photograph: PA

“Shout loudly, don’t hold back, lift your voice like a trumpet” – not the words of an anarchist group or anti-G8 street activist. The call to protest is, instead, that of the prophet Isaiah (58:1) and is the battle cry of the Northern Ireland director of Tearfund, an international evangelical Christian aid agency.

Protests are planned in connection with next week’s G8 summit at the Lough Erne resort outside Enniskillen, Co Fermanagh, but the organisers hope and anticipate there will be no repetition of the stereotypical violent G8 protests that scarred the streets of Seattle and Genoa.

Belfast will host two major protests on Saturday. The first is a trade union-co-ordinated gathering comprising a range of organisations across civil society. It forms a key part of what the Northern committee of the Irish Congress of Trade Unions (Ictu) calls a “Fairer World Festival”. It will not be what one organiser described as “the usual bunch of lefties”.

The second will be a day-long festive event at the city’s Botanic Gardens hosted by the IF Campaign for a world free from hunger and widely supported by 200 churches, charities and aid organisations including Oxfam, Christian Aid, Trócaire and many others.

‘End tax evasion’
Writing in the latest Church of Ireland Gazette, Tim Magowan, NI director of Tearfund, makes clear the challenge to the G8: “In essence, we are asking the politicians to prioritise decisions that will help the world’s poorest people – decisions to end tax evasion by multinational corporations and keep revenue in countries which desperately need it, decisions to allocate aid budgets to fighting malnutrition and making sure vulnerable people aren’t unfairly evicted from their land.”

On Sunday, there will be what Magowan calls a special G8 service from St Macartan’s Cathedral in Enniskillen at which the lead speaker will be the Ugandan-born Archbishop of York, Dr John Sentamu, a campaigner against injustice, hunger and racism. He famously cut up his clerical collar on TV in protest at the actions of Zimbabwean president Robert Mugabe and is not expected to mince his words in demanding a more just world.