Chicks hatched in nests in Co Kerry and Co Clare 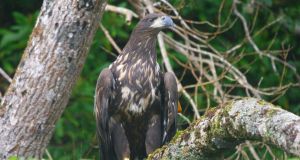 A file image issued by the Trustee White-Tailed Eagle Project of white-tailed eagle. It was confirmed today that the first white-tailed eagles have been born in the wild in Ireland for more than 100 years. Photograph: PA

White-tailed eagles have hatched here for the first time in over 100 years at two separate locations.

The event has been described as “momentous” and warmly welcomed, especially in the light of set backs which saw several of the 100 birds introdued here since 2007 die from indiscriminate poisoning and shooting.

In the last few days a pair has been confirmed to have hatched chicks at a nest in Killarney National Park, Co Kerry, having laid eggs in late March.

A second pair has also successfully hatched chicks near Mountshannon, Co Clare. This pair also made history in 2012 when they nested for the first time.

These are the first chicks of the high-profile reintroduction programme which began in 2007 with the release of young Norwegian eagles in Killarney National Park.

The programme was developed and funded by the Department of Arts, Heritage and the Gaeltacht in partnership with Golden Eagle Trust.

Minister for Arts, Sport and Tourism Jimmy Deenihan described the hatching as “momentous”.

“This is a momentous occasion in that we are now witnessing the first white-tailed eagles born in the wild in Ireland in over 100 years.

“The birth of these chicks gives a great boost to the reintroduction project initiated by my Department in conjunction with the Golden Eagle Trust.

He said the hatching was a significant step towards the aim of re-establishing a viable breeding population of white-tailed eagles in the State.

As part of the programme eagles from Norway were released in Killarney National Park over a period of five years.

Several pairs have now established themselves in counties Kerry, Cork, Clare and Galway at coastal and inland lake sites.

The Mountshannon breeding pair, a five-year-old male and four-year-old female, was collected on the island of Frøya off the west coast of Norway. This pair laid eggs in 2012 but failed to hatch chicks.

The Killarney breeding pair, a six-year-old female and five year old male, were collected on islands in Flatanger and Hitra, Norway, in 2007 and 2008.

The Killarney female spent part of the winter in early 2009 in the Scottish Highlands before returning to Kerry. White-tailed eagles can live for 25-30 years and generally mate for life

Dr Allan Mee, project manager in the restorationg programme paid tribute to local landowners and communitites for seeing to the welfare of the eagles and said the potential for tourism was graeat.

However, he asked that the hatching eagles but asked they not be disturbed by curious public.

“We are very conscious of the risk of disturbing the birds especially at this stage of nesting. I would stress that it is an offence under the Wildlife Acts to willfully disturb white-tailed eagles at the nest. We would caution people not to approach the nest area but instead avail of the unique opportunity to watch from Mountshannon pier.

“ Information on the birds, their ecology and conservation will be available.”