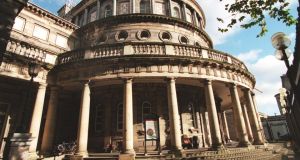 Access to records in the National Library could be restricted because of regulation on data protection, the Genealogical Society of Ireland has said. Photograph: Frank Miller

Access to old parish records on microfilm in the National Library and to records held by the State such as birth, death and marriage certificates could be restricted if a proposed European Union regulation on data protection goes ahead, the Genealogical Society of Ireland has said.

General secretary of the organisation Michael Merrigan said the EU proposed general data protection regulation requires public records held by the State including public records at the General Register Office, such as birth certificates, to be considered as personal information.

“For data protection purposes, we could end up in a situation where genealogical, biographical, historical or even journalistic research will be in some way curtailed,” he said.

The proposed regulation, which aims to protect individuals’ rights with regards to processing data, would have direct effect and would not need to be transposed into Irish law.

Mr Merrigan said anything introduced as part of the regulation should be done under the principle of public ownership and right of access to genealogical heritage. And this principle should be included in any measures dealing with access to records of a genealogical potential.

Finnish concern
The society has received correspondence from its counterpart in Finland raising similar concerns about the proposed regulations.

The Genealogical Society of Finland wants genealogy to be included in the regulation as an exception to the rules of data protection.

A meeting of the EU Council of Justice and Home Affairs will discuss the proposed regulations in Lithuania in July and the Finnish organisation has called on the Irish society to lobby Minister for Justice Alan Shatter in advance of it.

“There is a danger that if this regulation came in that genealogical research and the publication thereof would be restricted,” Mr Merrigan said.

He also said the issue highlighted the need for the establishment of an EU federation of genealogical societies to address matters of concern which transcend borders within the EU.