Work on €230m New Ross bypass due to begin in March 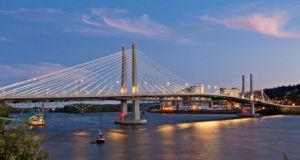 Bridge of the People in Portland, Oregon, a type of extradosed bridge similar to one planned for the River Barrow near New Bridge, Co Wexford. Photograph: Reuters.

A €230 million deal has been agreed for the construction of a 13.6km bypass of New Ross in Co Wexford.

The dual carriageway will include the world’s longest three tower extradosed bridge, a type of cable-stay structure, spanning the River Barrow.

It will measure 887m and stretch from Pink Point, Co Kilkenny to Stokestown, Co Wexford.

Work is expected to get underway in March on the bypass which will ease heavy congestion in New Ross. More than 2,000 people are expected to be employed during the works.

It is part of the Government’s capital plan 2016-2022 and will be developed over three years, scheduled for completion in 2019.

Theo Cullinane, BAM Ireland chief executive, said the deal marks the next phase of its investment in transport links to the southeast.

“This has been a priority for BAM as this deal follows on from our reaching the financial close on the M11 Gorey to Enniscorthy PPP project last October. Construction activity began on that project this month,” he said.

BAM said the project will ultimately create up to 2,100 jobs while the Department of Transport said up to 300 of those would come during the construction phase.