Roads, car parks, sea walls and beaches have been destroyed in Co Clare, where locals are wondering when the next deluge will come, and who will fund the repairs 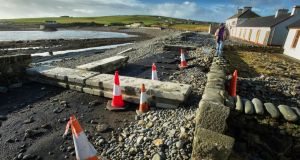 Undermined: the main road in Kilbaha, Co Clare, was ruined by the storms, which lifted rocks out of the pier and sent waves over houses. Photograph: John Kelly

Usually, if you turn up with a reporter’s notebook at places where bad news has put them in the headlines, people are reluctant to talk to you. This was not the case on Thursday on the west coast of Co Clare, from Lahinch to Quilty, and Kilkee to Kilbaha.

All have been severely damaged by the recent storms. The initial shock is over, and the foremost question on everyone’s mind now is: who’s going to pay for it?

Michael Vaughan, president of the Irish Hotels Federation, runs a hotel in Lahinch. He meets me on the promenade, which borders a large car park that is currently open only to pedestrians. The nearby playground is also closed. “Equipment unstable due to storm damage,” reads a sign.

The playground is a community-run facility that took seven years of fundraising to complete, says Vaughan; repair costs are estimated at €50,000.

As we talk, council workers are repairing holes in the tarmac, rebuilding walls and replacing capstones. Some of the holes are a metre deep.

“The council put in €6 million as estimated costs for repairs to Lahinch prom alone. They put the costs for the whole of the Clare coastline, from Loop Head to Black Head, at €23.5 million. But those costs were estimated before the big storm last Saturday. The estimate has now gone up to €30 million. And we’re due another big storm on March 1st, with high tides almost every other month,” Vaughan says. “Where’s the money going to come from?”

He points to tall mesh fences at the far side of the car park that form a boundary with the local golf club. The fencing is buckled. “One of the effects of the storm is that when the stones on the beach shifted, it dislodged all the rubbish people had been leaving between the stones for years. Rubbish was pasted all along those fences: nappies, plastic, you name it.”

A staggering 600 sacks of rubbish were collected from the fences and greens by 50 volunteers that the golf club mustered after the storm.

Vaughan says, as an aside, that he hopes that ongoing council work at the promenade might include building changing rooms for surfers. “It’s a regular feature to be seeing guys mooning their backsides in the car park. That’s not good enough in 2014 for Clare’s premier seaside resort,” he says.

Surf schools
There are four surf schools in Lahinch, which has a year-round population of 700. “Between them they employ at least 40 people,” says Vaughan.

One is the Green Room Surf School, which Stuart and Debbie Green have been running for 13 years. They had some flooding, but, as Stuart says with relief, “We’re a business that’s used to getting back things wet: surfboards and wetsuits.”

Their bigger concern is the almost total fall-off in winter business over the past few weeks. “It’s not because people don’t want to surf. The car park is closed, so there is nowhere for people to park. Usually we get a lot of people at weekends. That’s our window of business. It’ll be a struggle now to survive. Anything we saved up during the summer is going down rapidly.”

He is keeping the shop open because they want it “to be known we’re still open for business and to keep up the community spirit”.

As we’re talking, three foreign tourists come into the shop and ask about tides, as they’re thinking of renting gear to go surfing. They leave, saying they might come back later. When I ask how many customers he’s had that day, Green laughs. “They were my first,” he says. “And they may not even come back.”

Pungent seaweed
The low concrete wall that runs alongside Quilty village is partially broken. When I step out of the car I’m hit by the pungent smell of seaweed. It’s in fields far from the sea, draped along the road and piled up in front gardens.

Beatrice O’Riordan has been running the village post office and shop for 30 years. “The wall cracked, and parts of it broke, but without the wall the village would be gone,” she says.

She is particularly upset by the damage done to the area in front of the church. “It was all done beautifully, and now the storms have picked up the hedges like daisies and thrown them around.”

At the seafront amenity area – part church car park, part park – the hedging and planting are indeed destroyed. As are many of the picnic tables, most of the paving and parts of the sea wall.

“The seawater went inside the door of the church,” says Michael Talty, a parish activist and contractor. He gestures first to the church opposite the ruined park, then towards the view of rocky platforms and a roiling sea. “This was probably the most popular wedding venue in all of Clare. And now look at it.”

At Kilkee there is much less sand on the horseshoe beach than there was before last weekend, when the storms carried a lot of it away.

The sets of steps that used to lead down to the sandy beach now end at piles of stones. Here, too, walls are broken and the paving around the bandstand destroyed.

To the west of the beach, up by the Diamond Rocks, many of the steel railings at the seafront car park that the council renovated only recently have been twisted out of shape or destroyed altogether.

Cut off
Bernie Keating is standing in his bar at Kilbaha, on Loop Head, and looking out at where the road into the village used to be. His family and about 60 other people have been cut off since last Saturday, when the storm pulverised their access road.

Keating’s Bar & Restaurant is on the seafront, as is the Lighthouse Inn, at the far side of the ruined road. The Lighthouse was flooded, and its decking at the front was washed away. At one point waves came over the roof of the two-storey building.

Keating’s wife, Helen, shows me startling footage of the waves on her mobile phone. She also shows me a photograph of the three-metre-deep sink hole that appeared outside their bar during the storms.

Chunks of the pier wall, which was built from boulders in Famine times, have vanished, tossed into the sea or nearby fields.

The worry for the people of Kilbaha now is that, although the council is working on temporary repairs to the road, it remains vulnerable to further collapses.

Loop Head is a pilot destination for the Wild Atlantic Way. Reliable access is essential. “We need money invested in that road,” Keating says. “But where’s the money going to come from?”