Where will Ireland get its energy in 35 years’ time? 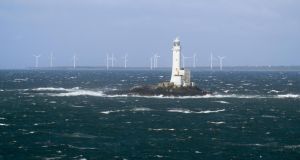 Tuskar Lighthouse: many of the technology and engineering challenges of wave, tidal and offshore wind are likely to have been overcome, and we will have offshore “farms” where energy is harvested from the seas around us

What will Ireland’s energy mix look like in 2050? How will we deal by then with the three issues that dominate energy supply today: cost; security of supply; and environmental impact?

In some ways it will look very much the same, but in others it will be very different, energy commentators say. We will have retired the Moneypoint coal-fired power station by that time, but will likely have transferred our preferred fossil fuel to gas.

By that stage, many of the technology and engineering challenges of wave, tidal and offshore wind are likely to have been overcome, and we will have offshore “farms” where energy is harvested from the seas around us.

We will also see major changes in the home consumption of energy, with consumers becoming electricity traders and selling it into the national grid. We will have access to new technology that will lower the cost of heating and transport.

What will not have gone away are those three issues which must be satisfied, cost, security of supply and environmental impact, suggests ESB chief executive Pat O’Doherty. “Whatever we build today will be with us for the next 30 years, and we recover our investment over those periods,” he says. “The investment choices you make today are driven by those points of cost, security and the environment.”

This makes it very difficult to anticipate what will be needed by 2050. “There is huge uncertainty on the market that was not there even six or seven years ago,” he says. “The role that electricity plays in society is as an enabler of social wellbeing. The electricity system is not an end in itself, but an enabler that feeds all the way through to competitiveness.”

One issue that is clear is the requirement for Ireland to move its energy system towards a reduced environmental impact. “Our path to zero fossil fuels is the only way,” says Brian Motherway, chief executive officer of the Sustainable Energy Authority of Ireland.

At the moment we are highly dependent on importation of our energy needs via fossil fuels. We imported 89 per cent of our energy in 2013, at a cost of €6.7 billion, Dr Motherwell says. If we introduced a range of environmentally friendly alternatives then this risky dependency could be reduced and it would save us money as well.

Wind is helping to bring down import dependency, says Kenneth Matthews, chief executive officer of the Irish Wind Energy Association. “A lot of multinationals invest on the basis of a country’s energy carbon dioxide intensity. We have an island energy system, a skilled workforce but we also have an electricity system with one of the lowest carbon intensities in Europe,” he says, and this is down to wind energy.

The European Union is driving member states towards zero carbon by setting medium-term limits under a directive that says 20 per cent of a country’s fuel mix must be from renewables by 2020. This is not just electricity: it is also energy used for transport and heating buildings.

Ireland is on target to achieve these goals, but the real challenge comes when trying to get past these and on to a carbon- neutral energy system. This will be achieved by a wide mix of energy sources, much of it based on supplying our energy requirements using electricity, but also an increased use of native biomass sources such as wood pellets.

We will need the security and reliability of gas-powered turbines to provide electricity when the wind doesn’t blow. And we will still have power stations that can keep the electricity system topped up. These produce carbon, so we will have to rely on new technologies to make them carbon neutral.

“In the short term the first question is: Can we use less? And there is always room for energy conservation, and the opportunities for greatly improved efficiency is vast,” says Motherwell.

Maintaining a mix is also essential. “We need all types of energy that are clean and at a reasonable cost. Ireland has advantages in being richer in clean energy resources than in fossil fuels. Diversity reduces risk, but by 2050 we have to be out of carbon.”

So what might be delivering our energy by 2050? There will certainly be a mix according to those in the energy business and in energy research. Companies are already turning to biomass for large-scale process heating. Aurivo Co-Operative Society in Sligo switched from burning five million litres of oil to 30,000 tonnes of a home-produced energy source, wood pellets, using advanced boiler technology developed in Ireland, says Motherwell. The same approach is being pursued by hotels, hospitals and industry.

Producing renewable transport fuels in heavy transport vehicles where electric just won’t work is always a challenge, but University College Cork researcher Prof Jerry Murphy is developing a solution. He uses surplus night-time electricity from spinning windmills to split water into hydrogen and oxygen. He then pumps the hydrogen into an anaerobic digester and changes it into methane. This can be used as a gas fuel or can be liquefied for transport applications.

By 2050 our mix will include wave, tidal, biomass and solar along with plenty of wind. “There is also the changing role of the consumer, with customers becoming producers of electricity. It is the democratisation of the electricity supply that puts the consumer more to the fore than in the past,” says Mr O’Doherty.

1 Donald Trump’s political success is based on racism
2 Ireland earns ‘right to be hopeful’ again as Government fast-tracks plans to reopen country
3 Pubs reopening will not mean ‘fellas having a few pints and peanuts’, Holohan warns
4 Coronavirus: People to be allowed to travel anywhere in their county from Monday
5 ‘White Irish people have never had to think about this’
Real news has value SUBSCRIBE