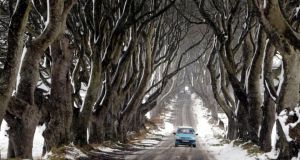 Snow at the Dark Hedges tree tunnel, which was featured in the TV series Game of Thrones, near Ballymoney in Co Antrim. Photograph: AFP/Paul Faith/Getty Images

Met Éireann has issued a low temperature warning including the possibility of further snow, while gardaí and safety authorities have urged people to take extra care and check on elderly neighbours during the cold spell.

The low temperature warning valid until 10am Monday was accompanied by warnings from the AA for motorists to slow down and be aware that stopping distances are 10 times further in snow and ice.

According to Met Éireann Monday will be “a very cold day” with values of only one to five degrees.

The wintry weather will continue on Monday night with snow falls possibly higher than 5cms in places by Tuesday morning. It is expected to be very cold overnight with temperatures between zero and minus three degrees generally, but as low as minus six or seven degrees with overlying snow in Ulster.

Early indications suggest that it will become less cold for Friday and the weekend but unsettled with rain or showers at times.

Met Éireann has also issued a small craft warning as southerly winds are expected to reach force six on Monday morning on coasts from Roches Point to Erris Head to Malin Head.

Dublin Airport said it was operating normally after the high winds at the weekend.

Bus Éireann also said all its services were operating “in adverse conditions”.