Water quality back to normal at two of three Dublin beaches

Killiney and White Rock cleared, sea at Sandymount to be avoided until next week 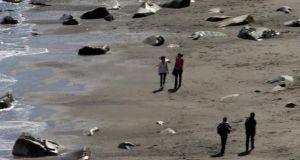 Swimming bans at two Dublin beaches due to poor water quality were lifted today, although concerns surrounding Sandymount remained after heavy rain caused a drainage overflow in the area.

On Wednesday a temporary “prohibition of bathing notice” had been put in place after tests confirmed conditions at the popular coastal spots “did not comply with the minimum standards set down for bathing waters”.

The local authority said that prior to the poor samples, 15 of 16 previous tests at Killiney this year found the water quality to be excellent, while at White Rock all 16 similar tests were found to be of the highest quality.

Following an analysis of the latest samples, officials lifted the prohibition notice and said blue flags would be put back in place.

Bathing had also been stopped at Sandymount beach and while water quality there was deemed to have returned to normal today, the public were advised to remain out of the sea until early next week. Dublin City Council, which has authority for Sandymount, said latest sample results there had returned water quality in compliance with water regulations.

However, it said that following intense rainfall in the area today an emergency overflow facility in the local drainage network was activated resulting in an overflow onto Sandymount Strand.

“As a result of this and in consultation with the HSE, it has been decided, as a precaution, to replace the temporary Prohibition of Bathing Notice with a Bathing Water Advisory Notice,” the council reported.

“This notice does not prohibit bathing but recommends that people do not bathe at this location until such time as it can be established through water quality testing that the quality of the bathing water in Sandymount satisfies the requirements of the Bathing Water Regulations 2008.”