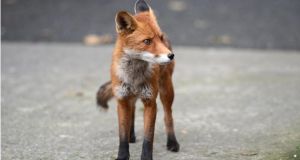 Dún Laoghaire-Rathdown County Council has decided to contact the National Parks and Wildlife Service over the urban fox “problem” in the area. Photographer: Dara Mac Dónaill /The Irish Times

Dún Laoghaire-Rathdown County Council has passed a motion to address the urban fox “problem” in that area of south Dublin.

After a heated debate last night, the council agreed to contact the National Parks and Wildlife Service to determine what has and will be done about the local fox population.

Speaking after the meeting, Fine Gael councillor Barry Ward, who brought the motion, said he had spoken to a large number of people concerned about the urban fox issue.

“There is a potential road safety hazard because they prowl around at night, as well as a hygiene issue with bins and fouling,” he said. “If there’s an explosion in the local population, someone should be addressing it. That’s the whole purpose of contacting the National Parks and Wildlife Service.”

Politicians who opposed the measure suggested engaging a wildlife expert and educating the public not to leave food out for foxes or any other wild animals.

The council has also asked its strategic policy committee for guidelines regarding the use of council owned or operated community facilities in order to “achieve open access to all residents and sectors of society”.

The matter arose from complaints that a community facility denied access to politicians attempting to hold public meetings about political issues.

Councillor Hugh Lewis claimed he was denied access to hold an anti-water charges meeting at a community facility. The council also voted to pass a motion to include a referendum to repeal the 8th amendment of the constitution in the list of referendums planned for 2015.