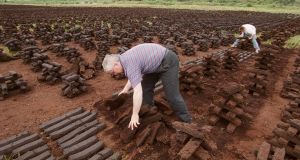 Ireland’s contribution could include the restoration of peat bogs, reafforestation, and reduction in fertiliser use. Photograph: Alan Betson

The agreement is likely to have an impact on next month’s UN climate change conference in Paris, COP21.

The 195 parties to the UNCCD, including Ireland, agreed in Ankara to set a new environmental target: achieving “land degradation neutrality” by 2030. This means maintaining the world’s stock of healthy, productive land at a stable level.

At present, 12 million hectares of land is degraded annually through infrastructural development and unsustainable food production. So the deal at Ankara commits the UN’s members, albeit on a voluntary basis, to restore or rehabilitate at least that area every year, just to keep things from getting worse.

This target had already been endorsed in the Sustainability Development Goals agreed by the UN General Assembly last September. The UNCCD decision, however, marks a significant advance, in that it sets in motion a framework whereby this target might be achieved.

It also marks an expansion in the role of the UNCCD. The agency had previously focused on attempting to counter the rapid degradation of productive drylands (“desertification”), especially in Africa. It will now also actively promote and assist land degradation neutrality in non-arid areas across the world.

“That is the fundamental change that has taken place,” UNCCD executive secretary Monique Barbut told The Irish Times after the meeting.

Not everyone agreed with this interpretation. Francisco Barreto Campello, the leader of the Brazilian delegation, who had opposed any extension of the UNCCD’s role, insisted on Friday evening that the convention would remain limited to drylands, in line with its unchanged formal mandate.

The scientific definition of land degradation neutrality adopted by the conference, however, omits any such limits, and the consensus was that a significant shift has occurred.

Ms Barbut said Ireland’s contribution could include, for example, the restoration of peat bogs, reafforestation, and reduction in fertiliser use.

She stressed the climate benefits of reclaiming degraded land, claiming that full implementation of the target could reduce global warming by half a degree, through carbon sequestration in the soil.

“We are sending a strong message to Paris,” she said.