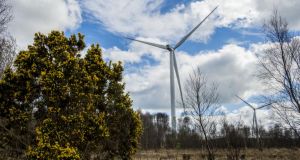 The decision to abandon negotiations on the project, which has featured strongly in the local and European Parliament election campaign, comes before a protest march planned in Dublin tomorrow. Photograph: Brenda Fitzsimons

The collapse of a controversial wind export plan has been announced by the Government on the same day that the UN’s top scientific body called for a rapid switch to renewable energy to fight climate change.

Minister for Energy Pat Rabbitte said that “given the economic, policy and regulatory complexities involved” the Irish and British governments had failed to agree terms “to facilitate green energy export from the Midlands within the EU’s 2020 timeframe”.

Under the plan, three companies – Element Power, Mainstream and Bord na Mona – planned 1,000 turbines in five Midland counties to export three gigawatts of green energy into the British national grid. Negotiations on the multibillion euro deal were called off because “there was nothing left to discuss”, Irish officials said last night.

The decision to abandon negotiations on the project, which has featured strongly in the local and European Parliament election campaign, comes before a protest march planned in Dublin tomorrow.


Pay negotiations
The scheme needed a regulatory agreement between Dublin and London, which would, among other things, say who would pay for an interconnector to carry energy to Wales.

Taoiseach Enda Kenny and British prime minister David Cameron agreed, during St Patrick Day talks in 10 Downing Street, that officials would be told to make another attempt to reach agreement.

The move came as Mr Rabbitte warned a deal was “unlikely” because the British side wanted to pay no more for Irish onshore wind energy than it would pay in Britain – even though it would have to be taken there.

Irish sources said no flexibility had been shown by the British department of energy and climate change after the Downing Street talks.

Mr Rabbitte’s decision has angered developers who plan to export three gigawatts of offshore energy from a necklace of projects in the Irish Sea. They say the move threatens them, even though the projects are entirely separate.

Brian Britton, who heads one of the developers, Oriel Energy, said: “They have taken only four-and-a-half weeks, rather than the three months set down in the Downing Street agreement.” Mr Britton also leads the National Offshore Wind Association.


Ironic
“It is somewhat ironic in a week which has seen the first State visit from an Irish President to the UK, that the Irish Government has pulled back from a policy initiative which would have demonstrated the real benefits of partnership in both economies,” said the association, in a statement.

Mr Rabbitte regretted that a deal with London “has not been possible” but said wind energy exports from Ireland to Britain “are inevitable after 2020”.

“Economic analysis conducted on the Irish side clearly indicates that under agreed policy and regulatory conditions, renewable energy trading can deliver significant economic benefits to Ireland and the UK, as well as being attractive to developers,” he said.

Green Party leader Eamon Ryan said delaying the development of renewables would “do us nothing but harm”.

In its latest report, the UN’s Intergovernmental Panel on Climate Change said a large-scale transformation of the energy sector from burning fossil fuels to relying primarily on renewables is needed to contain global warming at 2 degrees.

“Without additional efforts to reduce greenhouse emissions . . . emissions growth is expected to . . . result in global mean surface temperature increases in 2100 from 3.7 to 4.8 degrees,” it warned.