Donald Trump on his arrival at Shannon Airport to visit his golf course in Doonbeg, Co. Clare in 2014. He he is due to visit Ireland later this month. Video: Ballywire 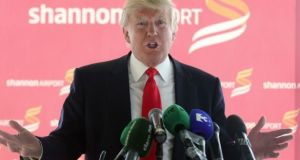 The general manager of Donald Trump’s Co Clare golf resort has said the outcome of plans for a €10million rock barrier at Doonbeg “will determine the future of our business, the local community and its citizens”.

Joe Russell made his comment yesterday after An Bord Pleanála ruled the 200,000 tonne embankment does not constitute strategic infrastructure development (SID).

As a result, Mr Trump’s main Irish firm, TIGL Ireland Enterprises Ltd, is to re-lodge its plans with Clare County Council for the 2.8km barrier which would be located on Doughmore beach facing onto the Doonbeg links golf course which it says is threatened by coastal erosion.

Mr Trump is currently leading the race for the US Republican presidential nomination. He earlier this year described his investment in Doonbeg as “small potatoes”.

The company initially lodged plans with the council in February with its consultants warning the application was not successful it would “bring the viability of the entire resort and its potential closure into question”.

The council returned the application to the company and requested it consult with An Bord Pleanála to see if the plan represented an SID. If that was the case, the application would by-pass Clare County Council and be decided by the board only.

The Trump firm lodged the planning documents with the appeals board on March 9th and the board has now determined it is not a strategic case.

An inspector noted the application aims to protect a valuable economic asset to Co Clare “and could also serve to protect the adjacent farmland from future coastal inundation which would in turn protect local farm livelihoods and incomes”.

Mr Russell said he had formed the opinion “that this is a local matter where the outcome will determine the future of our business, the local community and its citizens”.

Mr Russell said the time lost by the firm engaging with the board will have “no material influence” on the timeline for the development.

The works are conditional on planning permission being secured and are to face opposition from the Friends of the Irish Environment group.

If the application does receive the green light, work is scheduled to start next spring.