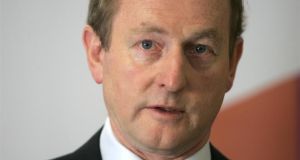 the Government had now given priority to enacting its long- delayed Climate Action and Low Carbon Development Bill.

The pending legislation is Mr Kenny’s card in responding to UN secretary general Ban Ki-moon’s call for those attending the one-day summit to bring “bold actions and announcements” that would galvanise international action on global warming. “This level of prioritisation of climate change . . . is long overdue,” said Ciara Kirrane of the Stop Climate Chaos coalition.

“By placing the Climate Bill on the A list the Government is signalling its intention to enact climate legislation before the end of 2014,” she added.

However, she called on the Taoiseach to go further by incorporating the principle of “climate justice” in the Bill, to acknowledge the responsibility of developed countries such as Ireland to aid vulnerable communities “on the front line of climate change”.

Friends of the Earth has called on Mr Kenny to tell the summit that Ireland plans to be “fossil-fuel free” in electricity and buildings by 2040 – a commitment that would position the State alongside progressive countries such as Denmark on this issue.

Like other world leaders, he will have an allocated time slot of four minutes to set out Ireland’s stall on climate change.

Later he will attend a reception at the Irish consulate on Fifth Avenue for young Irish professionals working in the New York area, before going to the Waldorf Astoria hotel for a reception hosted by US president Barack Obama and his wife Michelle.

Other Irish participants in the summit include former president Mary Robinson, now a UN special envoy on climate change, who will co-chair a session on agriculture, exploring how to reduce the emissions from this sector – so important for Ireland.

Tom Arnold, director general of the Institute for International and European Affairs and former chief executive of Concern, is due to tell the session that Ireland could play a leadership role in developing “climate-smart agriculture” to combat global warming.

Last week, Tánaiste Joan Burton told Irish Corporate Leaders on Climate Change that it was important that all sectors of society “get involved and help to mould our response to the incremental challenges that lie ahead in making the required transition to a low-carbon economy”.