Swan counters out in force to track movements of migratory birds 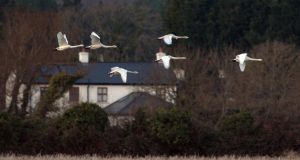 Whooper swans in north Wicklow in mid-January, at thge start of the five-yearly all Ireland census organised by BirdWatch Ireland and the National Parks and Wildlife Services. Photograph: Cyril Byrne/The Irish Times

More than 300 people took part in the all-Ireland swan census over the weekend. Once every five years, this census tracks numbers of whooper swans and Bewick’s swans.

These two migratory species visit Ireland every winter but have experienced mixed fortunes in recent years.

The number of Bewick’s swans has been falling: just 80 were recorded in the last census in 2010, compared with thousands a few decades ago.

“We expect that this weekend’s figures will show yet further declines,” said Niall Hatch, development officer with BirdWatch Ireland.

“In contrast, whooper swans are continuing to increase, with more than 15,000 birds recorded in 2010.”

The census was undertaken by BirdWatch Ireland, the Irish Whooper Swan Group and the Wetlands and Wildfowl Trust. It did not include Ireland’s best-known species, the mute swan, which is found here year-round and often in closer proximity to people.

The mute swan has a black and orange beak with a black bump at the base, while the whooper and Bewick’s swans have flat black and yellow bills.

Since Friday, the 300 volunteer swan counters have been monitored the numbers of swans at their wintering sites around Ireland and checking for new areas where they may flock to. The results will be collated in the following months.