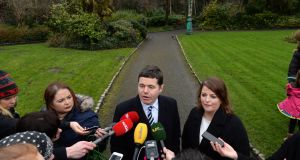 The current industrial action by Luas staff over pay and conditions has brought the Dublin system to a standstill for four days. Further strikes are planned for next month, including on St Patrick’s Day.

“The people who I represent are the taxpayer and the commuter and if this kind of stuff goes ahead the Luas will be wrecked,” he told RTÉ’s Morning Ireland.

Talks at the Workplace Relations Commission aimed at resolving the row are due to start on Wednesday.

Mr Donohue said he hoped the meeting scheduled to take place between the employer and employees this week would happen on a “reasonable basis”.

However, tensions between the parties appear to have escalated this week.

Luas operator Transdev claimed its tram drivers are taking the proverbial by seeking unprecedented levels of toilet breaks since the start of industrial action over pay and conditions.

It claimed these breaks caused serious disruption to the travelling public.

It also said if the practice did not stop it would consider legal action and drivers were found to be delaying services could be sacked.

In the letter, Transdev human resource manager David Horgan said since the Luas system was introduced 12 years ago there had not been a day where that number of toilet breaks was required.