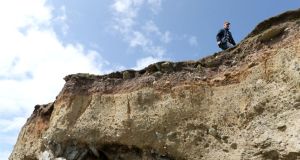 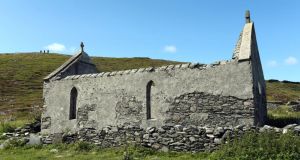 The ruin of the chuch on Inishark Island. Photograph: Joe O’Shaughnessy

When Micheál Ó Suilleabháin witnessed his name carved in stone as builder of Inishark’s slipway and pier, he may never have imagined a series of Atlantic surges would snap it in two.

The top half of the stone marker laid by the Office of Public Works in 1937 is evidence of the strength of swells which also tore at the island’s graveyard – yet left a tiny bothy art gallery (see panel) intact.

“One more storm like that series of high tides we had this past winter and it won’t survive,” Féichin Mulkerrin says of the small cemetery, built above the south-facing harbour.

Tiny ribs protrude through the glacial deposits of boulder clay. American archaeological students, on a recent field trip with Notre Dame University, reburied some of the more exposed fragments.

Mulkerrin estimates the sea took at least 3m off the cliff face on its south-facing section, and 5m to the southwest, during the high tides between January and February. They also reduced Inishbofin’s 19th century East End pier to rubble.

The St Brigid’s system on February 2nd was fuelled by a 10m swell in the Atlantic, says Mulkerrin. Inishark’s battered breakwater also bears recent scars and the remains of steps leading from a pier adjoining the 1937 slipway have vanished.

Lying southwest of Inishbofin, Inishark has had no permanent residents since 1960 when the last 23 people were evacuated to the north Connemara mainland. As documented in James Morrissey’s recent book, Inishbofin and Inishark: Connemara, a combination of “weather, tides, seas and illness” defeated the six families, who were resettled in Claddaghduff and neighbouring areas by the Land Commission.

Pleas for a new harbour and a radio-telephone were rejected by the government which believed the resettlement option was the more economic. Islanders, whose fishermen were renowned for their boat-handling skills, left behind some of the best farming land on that part of the west coast and sheep continued to be grazed by Inishbofin farmers.

Properties in the deserted village were bought by a German. The 615-acre island is a nesting site for fulmars, red-billed oyster catchers, Arctic terns, guillemots and several corncrakes.

Even on a good day, the confused nature of seas around Inishark makes for a challenging crossing and so Luke Franklin didn’t quite know what to expect when he took a boat out several months ago after the winter storms.

It is a testament to 19th century construction skills that the outer walls of the island’s former primary school provided sufficient shelter for his 21st century bothy.

“Unofficial, unlocked and free,” reads the narrative to his “pop-up” art gallery, one of the most westerly on the Atlantic seaboard.

The prefab structure was put up by Mr Franklin, a Dublin film-maker based in London, as part of his master’s project at Central Saint Martins College of Art and Design in London.

The 4 Bothies project (4bothies.com) involves a library, study, studio and gallery, which he and friends constructed in four separate remote locations, using ply, builder’s plastic, railway sleepers and other materials.

There is no sign to his Inishark bothy – as with his other structures – and no security. The bothy philosophy is that “if it’s hard enough to get there, and hard enough to find, people will respect it”, he says.

“We’ve made this space for you and for anyone else to . . . show their work somewhere special,” his submission form reads. Copies have been left in the gallery, inviting artists to participate.

Martin Murray, one of the last pupil’s at Inishark’s school, is a recent contributor, as is a visiting kayaker, called Emma, who sketched an image of her trip.

“Technically, the idea was to have four white walls that artists could choose to use in any way they wanted, but we felt we needed to create momentum,” Mr Franklin says.

“Art has a value in wild and wonderful places, and it is as impossible as exploration, but I think we are also bringing a bit of life back to the island.”