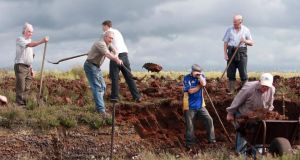 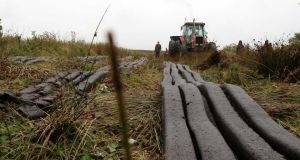 Machine-cut turf at Barroughter Bog, Portumna, Co Galway on Saturday. The bogs are being harvested despite their designation as EU special areas of conservation. Photograph: Hany Marzouk

There have been some infringement proceedings against Ireland that may have taken longer to settle but few taken have proved as bitter, as divisive or as politically charged as Case 2010/2161.

The case deals with an EU habitats directive that restricts turf-cutting on 53 raised bogs in Ireland. From the beginning it has been cast as a classic ‘them versus us’ confrontation, between faraway officials (who argue the resource and its unique habitat, flora and fauna is being depleted and must be preserved) and local families who say they have been denied continuance of turbary rights there for generations.

In the latest act of defiance in the east Galway bogs of Clonmoylan and Barroughter over the weekend, two plots of turf were symbolically hand-cut using sleáns. However, the reality is that modern technology has allowed cutting on a much vaster scale, not possible a generation ago, with commercial contractors being involved.

Finding a solution to the stand-off has proven a headache for the Government and for the relevant Minister, Jimmy Deenihan. A peatlands forum under the chair of former High Court judge John Quirke was held in early 2012. The compensation available was increased to €1,500 per annum to qualifying families, who were also offered the option of relocating to other (unprotected) bogs in the vicinity, and the delivery of turf to households from alternative sources.

Heritage
But the solution, while backed by a majority of those holding rights on the bogs (some €4 million in compensation has been agreed to date), was opposed by others. For them the matter ran deeper, to protection of what they considered their heritage. They also argued the settlement offered was unsatisfactory and insufficient.

The situation has led to tense stands-offs with gardaí. A dedicated investigation team, led by a detective superintendent, was formed within the force to pursue prosecutions against contractors continuing to remove turf.

The latest show of defiance shows the depth of feeling and support within local communities. The Turf Cutters and Contractors Association said as many as 90 people were involved. Gardaí observed the cutting but did not intervene.

There seems to be inertia and impasse at the moment. The EU Commission has warned of fines that could ultimately run into millions of euro and has also threatened court action in the face of continuing activity on the bogs.

Its argument is that almost 40 per cent of Ireland’s active raised bog habitat has been destroyed in less than two decades and continued cutting will put the remaining bogs at similar risk. For their part, turf-cutters argue that cutting and conservation can go hand in hand.