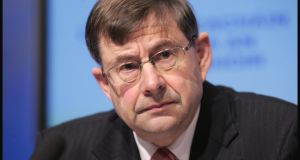 Eamon Ó Cuív: In July 2010 the island was officially handed over to Cork County Council on behalf of the Department of Justice by then minister for social protection. Photograph: Brenda Fitzsimons

Work is under way on a €5 million redevelopment of Spike Island off the coast of Cork. In July 2010 the island was officially handed over to Cork County Council on behalf of the Department of Justice by then minister for social protection Eamon Ó Cuív.

The local authority plans to transform Spike Island into a major tourism and heritage centre, highlighting its role in Irish history. Over the centuries it has been the site of monastic settlements, penal colonies and military bases.

The initial phase of work will see a number of its historic buildings upgraded. Landscaping as well as refurbishments and lighting additions to the pier will also take place.

The bastions on Fort Mitchell will be opened as viewing points for tourists, and military magazine storage facilities will be upgraded.

The prison will subsequently be reroofed and the interior is set to be refurbished to house an interpretive centre.

In a statement the council said the island would be transformed into a unique cultural heritage and activity destination.

“It is hoped that the development of Spike Island as a visitor attraction will help build on the existing tourism and heritage structure in Cork Harbour.”

Spike Island was the last place that thousands of Irish convicts would have seen before they were dispatched to Van Diemen’s Land (Tasmania).

The first known use of the 106-acre island was as a monastic settlement when a religious community was established on it in the 7th century.

The first prison on the island dates from the 17th century following the end of the Cromwellian wars.

During the late 18th century and early 19th century it was used to hold prisoners to be transported to the West Indies and Australia, and during the 1850s John Mitchel (after whom the prison was renamed in 1938) was jailed on Spike for his involvement in the rebellion of 1848.

The island remained in British hands until July 1938, when the last British troops departed and the Tricolour was raised by Eamon de Valera.

It was transferred to the Department of Justice in 1985, and operated as a prison for many years.