Rosie Hackett Bridge to open at 6am tomorrow

New Liffey crossing for bikes, public transport and pedestrians will be closed to cars 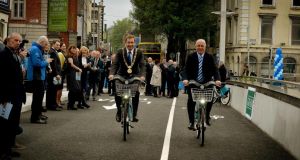 The river Liffey’s newest crossing, the €13.5 million Rosie Hackett Bridge, will be open to public transport, bicycles and walkers from 6am tomorrow morning.

The 21st bridge to cross the Liffey within the city boundary will connect Marlborough Street on the northside with Hawkins Street on the south and will carry the cross-city Luas from 2017.

The bridge will not be open to general traffic but will carry a single southbound Luas tram track in the centre and two southbound bus lanes either side, one lane going straight onto Hawkins Street, the other turning right and heading towards O’Connell Bridge.

The new bridge would result in a significant improvement in bus journey times, Mr Phillips said. “The postponement of Metro North and Dart Underground means all our public transport remains on the surface, so we really needed to free up more space for buses.”

Motorists heading west on Burgh Quay will have a new set of traffic lights to contend with before reaching O’Connell Bridge, but Mr Phillips does not expect an increase in traffic congestion.

“The lights have been synchronised so that it shouldn’t make a difference to traffic, but in any case our priority is public transport not cars.”

The bridge was officially named today in honour of trade union activist Rosie Hackett, who took part in the 1913 Lockout and the 1916 Rising. Her nephew John Gray attended the ceremony, along with Minister for Transport Leo Varadkar, President Michael D Higgins’ wife Sabina, and Lord Mayor of Dublin Oisín Quinn.

Work on the bridge began in November 2011 and was due to take 18 months, but the foundations of the quay wall turned out to have been built on sand rather than rock. Most of the first year of work was spent securing and stabilising the wall and creating an abutment for the bridge. It was October 2012 before building on the river started.

A bridge at this location was proposed by the city council as far back as 1997, but at that stage it was earmarked for a pedestrian only crossing. It was the advent of plans to connect the Red and Green Luas lines which expanded the council’s ambitions for the bridge.

In 2005, five proposed routes for the cross-city Luas line were announced, two of which required a bridge at Marlborough Street. The following year the Railway Procurement Agency announced its preferred route for the line, confirming the need for the bridge. It was not until mid-2008, however, when the council announced that a public transport bridge was to be constructed.

1 Pricewatch: Left on the shelf - what we are no longer buying
2 Unidentified man has been in Irish psychiatric hospital for 30 years
3 Coronavirus: Numbers receiving pandemic payment falls as thousands return to work
4 Ireland’s coronavirus restrictions may lift more quickly if case numbers keep falling
5 Coronavirus: People told not to make appointments to buy furniture
Real news has value SUBSCRIBE