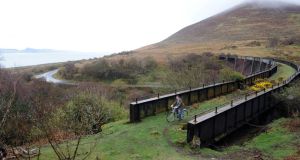 Financial help for struggling rural towns, and greater collaboration between Government departments and agencies, are among the recommendations in a report which Taoiseach Enda Kenny and Minister for the Environment Phil Hogan have endorsed.

It also recommends the Minister for the Environment should be responsible for co-ordinating rural economic development on a statutory basis, backed by a high-level implementation committee.

Rural areas outside the State’s five main cities have been particularly affected by the post-2008 economic downturn, with an increase in unemployment of 192 per cent, compared to 114 per cent in urban areas, according to the Cedra report.

“The impact is visible nationwide with closed shops, the steady flow of emigrants and the resulting impact on community, sporting and cultural life,” said Cedra chairman Pat Spillane.

When he outlined details of the study, at the Museum of Country Life in Turlough, Castlebar, Co Mayo, Mr Spillane said he was “not suggesting that there is a two-tier Ireland, but we are in danger of . . . it”.

The study, which Mr Spillane facilitated at no charge, involved some 100 meetings with various groups last year and led to 34 recommendations.

It notes that while the 1999 White Paper on Rural Development was “innovative and far-sighted”, with “many useful suggestions”, its effectiveness was undermined by the “absence of appropriate support, delivery and coordination mechanisms”.

It says that State agencies, particularly Enterprise Ireland and the IDA, should strengthen their collaboration at regional level and examine the potential to attract “small scale/niche” foreign direct investment to rural areas.

It calls for far more “explicit”, “proactive” and integrated approaches to rural economic development by the authorities responsible for national and European funding mechanisms – a recommendation which Mr Hogan said yesterday that the Government would implement in its approach to future EU structural funding.

Cedra was jointly commissioned by Mr Hogan and Minister for Agriculture, Food and Marine Simon Coveney in September 2012.

Its report comes three days after new research, by agriculture and food authority Teagasc, shows that one third of working-age households in small and medium-sized towns have nobody employed, and poverty rates in small towns are twice that of cities, standing at 10 per cent compared to 5 per cent.

The Teagasc research has identified a negative effect of urban commuter belts on towns, with a stark variation in economic and social conditions between towns that are closer and those that are further from the five main cities.

Speaking at the report’s publication, Mr Kenny played down the impact of the closure of Garda stations and post offices, and noted the growing trend towards purchases online.

He also singled out initiatives such as the Mayo Greenway, which was “exploding”, with last week’s announcement about a new 26km coastal greenway between Glenbeigh and Cahirciveen on the Ring of Kerry.

However, he said that improved broadband was an urgent issue which would be the focus of a new programme for some 1,200 towns, due to be rolled out by Minister for Energy Pat Rabbitte.

Mr Hogan said that the Government was committed to the recommendations in the report and would “take them seriously and implement them as soon as we can”.

Asked about the concerns expressed by Leader development companies about a new layer of bureaucracy, due to proposed changes in allocating EU funding, Mr Hogan said that community groups would work in “partnership” with local authorities.

“The community vehicle will continue to be the vehicle for implementing community projects,” he pledged.

The Irish Creamery and Milk Suppliers’ Association president John Comer said, “We shouldn’t need a study – even one as estimable as Cedra – to grasp the fact that if Irish farming can be moved onto a long, continuous, upward trend of sustainable production and income then the whole rural economy will move upwards in tandem.”

1 Father of rescued teenager: ‘They had a target, their aim was to get to the island’
2 Housing activists assist tenants to re-enter property following eviction
3 Nine tenants evicted from north Dublin property by men in masks and dark clothing
4 Garda killer Aaron Brady will be almost 60 by time he leaves prison
5 Covid-19: Taxi drivers, plumbers and carpenters among self-employed to get new €1,000 grant
Real news has value SUBSCRIBE

Weather: Temperatures to hit 26 degrees on Friday 11:54
Care home deaths account for half of North Covid-19 deaths 11:46
Coronavirus: Carroll Cuisine facility to reopen on phased basis 11:27
Eight rescued after Lough Derg cruiser runs aground 11:12
Father of rescued teenager: ‘They had a target, their aim was to get to the island’ 11:11