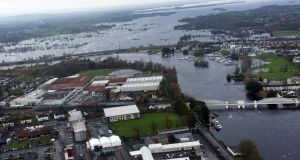 Jim Casey of the OPW said all its gauges across the Shannon recorded a drop in water levels of up to 7cm over the last 48 hours, but emphasised the situation remains severe in areas such as Athlone (above, January 5th), where the Shannon remains 2cm above its 2009 peak. Photograph: Irish Air Corps Athlone

River levels continue to fall across much of the country, but Wednesday night’s heavy rain brought fresh flooding to houses in Co Wicklow.

Parts of the east and northeast bore the brunt of Wednesday’s downpours, and “very significant rainfall” in the environs of the Wicklow Mountains caused flooding in Bray and Greystones, while a total of nine houses were inundated in Kilcoole and Newcastle.

A pumping operation in Mornington, Co Meath, was successful in saving numerous properties from flooding, and a spell of drier weather over the next five to six days should provide some reprieve for those in worst affected areas, although heavy showers will continue to affect counties along the south and west coasts.

“A lot of the country’s inland areas won’t fare too badly, and should generally be drier than what they have experienced over the last number of weeks,” set Met Éireann’s Joan Blackburn, speaking at a meeting of the National Co-ordination Group on Thursday.

“However, the coastal counties of the west and south through Thursday, tomorrow and over the weekend are likely to catch the majority of the showers and they are likely to be heavy in those areas,” she added.

Jim Casey of the Office of Public Works said all its gauges across the river Shannon recorded a drop in water levels of up to 7cm over the last 48 hours, but emphasised that the situation remains severe in areas such as Athlone, where the Shannon remains 2cm above its 2009 peak.

Elsewhere it is a mixed situation, with falling levels in the Brosna, Suck and Blackwater rivers, although the Nore, Slaney, Boyne and Bandon rivers have all risen and will “continue to be monitored closely”.

“We can’t say with absolute certainty that we have reached a peak across the Shannon but there are some optimistic signs,” said Brendan McGrath, representing the City and County Managers’ Association.

“If the current weather conditions prevail and we don’t get significant rainfall and the levels do peak in the next day or two, we’re optimistic, but not certain, that we’ll win the battle to keep the water out of the homes that are affected in Westmeath,” he added, with Department of Environment officials reporting similar “encouraging” signs.

Members of the Defence Forces were called on to provide transport for schoolchildren in Athlone and Shannonbridge on Wednesday, and will be required to do so again on Thursday.

The spill rate at Parteen Weir will remain at 470 cubic metres per second (cumecs) according to the ESB, and Inniscarra Dam on the river Lee has reverted to normal operation after discharging above average volumes of water over recent weeks.

ESB Networks has requested that people using boats and other flotation devices in flooded areas be cautious of overhead power cables where the clearance distance has been reduced, and the company is currently conducting aerial reconnaissance to record areas of particular danger.

The Irish Red Cross says it has now worked through three-quarters of the 120 eligible applications it received from flooded businesses for compensation, but about 28 applications were unsuccessful.

It will again help to administer a similar relief scheme for community, voluntary and sporting organisations announced by the Government on Wednesday, and details of this will be on the Irish Red Cross website from Friday.

Gardaí say diversions remain in place on the N25 Cork to Waterford road between Killeagh and Castlemartyr, and have reiterated calls for drivers of HGVs not to use minor roads as this is causing major delays and tailbacks due to reduced road width.