‘Rewilding’ of routes seeks to save bees from destruction 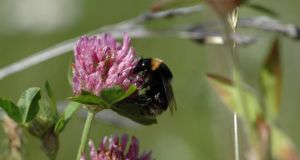 Most bees prefer plants which have flowers at the blue, purple and pink end of the colour spectrum, while plants like clover and knapweed are particularly successful at attracting them. File photograph: Natural England/PA Wire

Ireland’s motorways and railways are to be “rewilded” to create bee highways in an attempt to save them from extinction and their food supplies from devastation.

With one third of our 98 native bees facing wipe-out, the All-Ireland Pollinator Plan has been devised to encourage farmers, councils, schools and gardeners to create havens and pit-stops for the island’s species.

Transport chiefs have agreed to reduce roadside mowing on main roads and to open south facing railway embankments for nests.

Dr Una FitzPatrick, from the National Biodiversity Data Centre in Waterford IT, said the rescue plan will be a success if bee populations enjoy a revival within the next five years.

“We spent 40 years creating the problem so we are not going to solve it overnight,” she said.

The bee highway scheme makes the Republic and Northern Ireland one of the first regions in Europe to adopt such a wide-ranging plan and it mimics similar ideas being tested in Norway and in parts of Britain.

A map is to be produced by next spring pinpointing areas beneficial to bees which will be linked via wild-flower corridors along roads.

Most bees prefer plants which have flowers at the blue, purple and pink end of the colour spectrum, while plants like clover and knapweed are particularly successful at attracting them.

People taking pollinator friendly action such as allowing wild flowers to bloom on farms, in schools or public parks, will also be able to log their efforts online as part of the scheme to record where populations begin to thrive.

Simple back garden efforts can also be made by people sticking a bug hotel in the ground as a ready-made nest, or by setting space aside as a meadow.

Meabh Boylan, An Taisce’s green-schools biodiversity officer, said: “The importance of pollinators to humans cannot be overstated. Students are always amazed when I tell them that pollinators are responsible for making approximately one in every three spoonfuls of food that we eat.”

One third of our bee species - made up of one honey bee, 20 bumblebees and 77 solitary bees - are threatened with extinction.

Their economic value is difficult to measure, but the free pollination they provide keeps homegrown food prices relatively low and is said to be worth more than €7 million a year for apples in Northern Ireland, and €3.9 million for oilseed rape in the Republic.

Sixty-eight organisations have enlisted in the cross-Border effort to save bees, including government departments, road and rail companies, beekeepers, farmers’ unions, An Taisce and councils.

Dr Jane Stout, associate professor in botany at Trinity College Dublin, added: “If we want pollinators to be available to pollinate our crops and wild plants for future generations, we need to manage the landscape in a more sustainable way and create a joined-up network of diverse and flower rich habitats as well as reduce our use of chemical insecticides.

“This doesn’t just mean in the countryside, but in our towns and villages as well.”