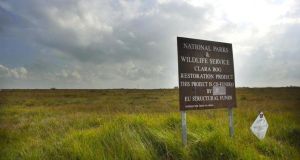 A rare moss presumed to be extinct in Ireland since the 1960s has been rediscovered at Clara Bog in Co Offaly. Photograph: Bryan O’Brien

A rare moss presumed to be extinct in Ireland since the 1960s has been rediscovered at Clara Bog in Co Offaly.

The discovery of waved fork-moss (Dicranum undulatum) – which was thought to have died out on Ireland’s bogs due to peat extraction – was welcomed by Minister for Heritage Jimmy Deenihan, who likened conserved bogs to miniature rainforests.

The rare moss was found by ecologist Dr George Smith while undertaking a preparatory visit for a moss workshop at Clara Bog Visitor Centre.

“This little plant is a perfect example of the biodiversity that can be lost if we fail to conserve and restore our raised bogs,” said Dr Smith.

He explained that “waved fork-moss and other bog specialists can only survive on wet, intact bogs, which are rapidly vanishing from the Irish landscape”.

The 450 hectare Clara Bog is one of the finest examples of raised bog in Ireland. A Nature Reserve and Special Area of Conservation, Clara Bog’s formation dates back 10,000 years to just after the last ice age.

Minister Deenihan noted two Irish mosses are now only known to exist at Clara Bog. “Bogs such as Clara should be considered Ireland’s rainforests in miniature, due to the rich assemblage of rare moss species found on them and just like rainforest need to be protected for future generations,” he remarked.

“This significant find shows that we can turn the tide of biodiversity loss through management of habitats, because nature can flourish if we lend it a helping hand,” Minister Deenihan he added.

Clara Bog hosts a variety of flora and fauna. The Clara Bog Visitor Centre houses an interactive multimedia exhibition, short films and activities for children. The centre is open from 10am until 5pm (June: Monday to Friday, July and August: Tuesday to Saturday) and admission is free.