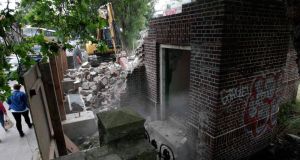 The public toilets at the junction of Anglesea Road and Merrion Road, across the road from the RDS, being demolished. Photograph: Mark Stedman/Photocall Ireland

A little piece of Dublin history has come to an end with the demolition of a landmark public convenience otherwise known as a public toilet.

The facility at the junction of Anglesea Road and Merrion Road, across the road from the RDS, is one of 70 public toilets that once operated in Dublin.

Attempts to put it up for sale last year proved to be unsuccessful despite Dublin’s nascent property boom and its prime location in the heart of Dublin 4, so it has now been put up for demolition.

The city had such public conveniences when many homes either had only an outside toilet or none at all.

Old and obsolete toilets can also be found in areas stretching from Harolds Cross to Howth including areas like Mountjoy Square, Glasnevin, Sandymount, Terenure, Dolphin’s Barn and Infirmary Road.

1 Coronavirus claims one more life while 11 new cases reported in Republic
2 Trump vows to ‘safeguard’ America’s values in Fourth of July speech
3 Kanye West says he will run for US president in 2020
4 Covid-19: Travel restrictions to stay and 'green list' put on hold amid fears of second wave
5 Bobby Storey: The IRA's planner and enforcer who stayed in the shadows
Real news has value SUBSCRIBE