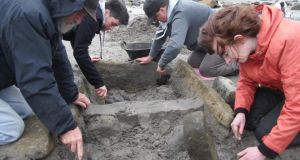 Volunteers excavate the box-like archeological structure on Coney Island. The site may date back 4,000 years

A box-like structure built from large stone slabs found on the island may have been used for bathing or cooking during the Bronze Age, experts believe. It has been excavated by a team led by Eamonn Kelly, director of Irish Antiquities at the National Museum.

The structure is thought to be part of a fulacht fiadh, a prehistoric trough or pit that was dug into the ground and filled with water. Stones, heated separated on an outdoor hearth, would be added to bring the water to boil.

Measuring about a metre long and 80cm wide, the structure was recently identified as an archaeological site by Ciaran Davis, an archaeology student at IT Sligo, and native of nearby Rosses Point, who alerted the museum.

“It tells us that people walked the beach here 3,000 or 4,000 years ago, searched for large stone slabs, and carefully built this structure,” said Mr Davis. “Many other archaeological sites probably await discovery on Coney.”

There are thousands of Bronze Age fulacht fiadh throughout Ireland, but to find one on a beach is a rare event, said Dr Marion Dowd, a lecturer at IT Sligo.

“I know of one other example in Cork. It makes us wonder why they would have wanted to heat saltwater.”

Hot water was typically used for cooking, bathing, washing, dyeing textiles and brewing alcohol, but the use of saltwater meant brewing was not the purpose of the Coney island device, Dr Dowd said.

Radiocarbon dating will determine the exact age of the discovery.

The structure has been known locally as the “lovers’ wishing well”, said Dr Dowd. The legend was that anyone who lay inside it would dream of the person they were going to marry. It was also known as “the sailor’s grave”.

Mr Kelly described the find as “very significant” and said it was “quite extraordinary” that the structure had remained undisturbed despite being known to local people for decades.

“It shows the absolute respect the community has for it, perhaps because some thought it was the grave of a sailor,” he said. “But we have seen grave sites elsewhere which were plundered.”

Currently one family lives full-time on Coney, but there are a number of holiday homes on the island, which is popular with day trippers who can drive or walk across via Cummeen Strand during low tide.