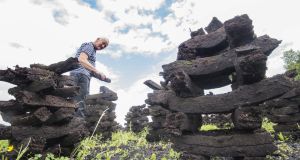 Solid fuels such as coal and turf for domestic heating remains the main cause of poor air quality in rural towns and villages, especially those not on the national gas grid. Photograph: Brenda Fitzsimons

A near-doubling of the number of cars on Ireland’s roads and the continued burning of solid fuels are the key drivers causing poor air quality in Ireland, causing more than 1,200 premature deaths every year.

Ireland’s air quality is good by European standards, but it does not fare so well when measured against new World Health Organisation guidelines , according to the latest EPA State of the Environment report.

Ireland exceeds WHO guideline values for PM10 and PM2.5 – very fine particulates smaller than 10 micrometres that can enter the lungs and cause major health problems.

Solid fuels such as coal and turf for domestic heating remains the main cause of poor air quality in rural towns and villages, especially those not on the national gas grid.

In larger towns and cities, air quality has improved as more homes have moved away from solid fuels to gas, while changes in diesel-engined cars has helped matters, too.

“However, there is a need for regulation of solid fuel beyond coal. Peat burning is still prevalent in many parts of the country – most particularly in rural areas – and contributes significantly in terms of particulates,” says the report.

The report adds that a high proportion of Ireland’s urban population is now exposed to harmful levels of air pollution based on the updated WHO measures.

Traffic is seen as the key pressure on air quality in our largest cities as exhaust emissions leave us hovering dangerously close to EU limits for nitrogen dioxide NO2, another major contributor to poor air quality.

Although NO2 levels are down from their height in 2009 when EU limits were breached, levels are on the rise again as more cars return to our roads in line with the economic recovery.

The passing of WHO guidelines into EU and Irish legislation and a national network of real-time data monitoring are also outlined as key to eliminating poor air quality and protecting our health.

According to EPA director general Laura Burke such measures will also have a positive knock-on effect on climate change targets, with the link between a clean environment and a healthy society beginning to seep into the general consciousness.

“In years to come, the pollution of our air from vehicles or burning fuels will be seen as being on a par with tobacco smoking,” she added.

The fact that over 1,200 people die prematurely from exposure to poor air quality should bring home the message to the general public, according to the EPA’s programme manager, Dr Jonathan Derham.

“That’s three a day,” he said. “So by the end of today, three more Irish people will have died prematurely associated with particulate matter.