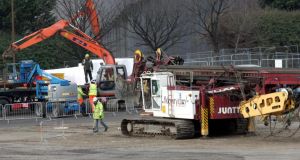 Work on the Dublin regional incinerator planned for the Poolbeg peninsula is expected to begin within weeks, according to a report presented to councillors in Tallaght yesterday.

The report stated that Dublin City Council – which is promoting the incinerator on behalf of the four Dublin local authorities – expected that the authorities’ private sector partner, Covanta, “will be in a position to proceed on site by mid-summer”.

The new timeline follows media comment at the weekend which suggested that Covanta had secured new financial backers, potentially including the National Pension Reserve Fund, and was close to announcing a date for work to begin on the €400 million plant.

It also follows a decision by Dublin City Council last month to grant Covanta more time to get its financing in place.

Yesterday’s report from South Dublin County Council said news of the date had been secured from Dublin City Council.

In the past 15 years the four local authorities have shared costs of some €90 million in promoting the incinerator. Yesterday’s report said South Dublin County Council had contributed €2.7 million to the city council in the year to May 2013. It said there “has been no change to the projected commitment of €20.8 million” to the project.

“The entire outlay by the local authorities will be recovered” and “the facility will ultimately provide an income stream for the region”, the report states.