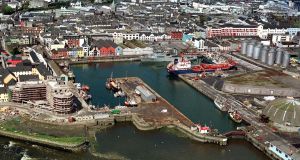 Detailed plans for a proposed €126 million redevelopment which would allow Galway harbour to accommodate cruise liners were outlined during the first day of an oral hearing in the city.

Experts representing the Galway Harbour Company outlined the perceived need for the 85.4 hectare project, which is expected to take eight years to complete, to the An Bord Pleanála hearing.

The proposed four-phase plan involves the construction of new deep-water berths to the south of the existing port, a marina and nautical centre. Construction of the first phase has been estimated to cost €52 million.

It is the first application in the State to use the “IROPI” route, which would allow a significant infrastructural development on a designated European habitat on the basis of “Imperative Reasons of Overriding Public Interest”.

Project engineer Eamon Waldron, on behalf of the harbour company, told the hearing there were “severe constraints” to operations within the existing harbour which would be addressed by the proposed development.

Mr Waldron said the restraints resulted from severely restricted access, having a tidal and gated harbour with a shallow entrance channel, and a port draught and dimensions which were too limited.

“The inner harbour area is controlled by dock gates which can be opened for only two hours before high tide twice daily and are then closed at high tide to retain the required ship water depths,” he said.

“There is therefore only a four-hour window in every 24-hour period when vessels can enter or leave the docks. This severely limits the potential of the harbour.”

He said the current constraints limited the size of vessels that could be accommodated to 5,000 tonnes for liquid and 3,000 tonnes for dry bulk, which made the use of the harbour “increasingly uneconomic” for customers.

The proposed new port would be able to accommodate vessels of over 20,000 tonnes.

Consultant Eugene McKeown told the hearing that the overall impact of the proposal would be to reduce noise levels in the existing harbour area, although there would be an increase in noise at the new harbour area – which is farther away from the city centre.

A plant ecologist, Dr Micheline Sheehy Skeffington, told the hearing that the “significant effect” of the proposed harbour extension would be to stabilise the shingle habitat and permanently alter its nature and plant species composition.

The hearing continues and is expected to run for at least two weeks.

Snow and ice expected as weekend cold snap sets in 10:31
Covid-19 situation ‘extremely worrying’ despite recent improvement – Glynn 10:33
Gardaí appeal for witnesses after woman is seriously assaulted in Dublin 09:59
Covid-19 transmission levels ‘too high for schools to reopen’ despite harm to children 09:55
Covid-19: Nphet warns of a ‘large number’ of deaths in coming weeks 09:43