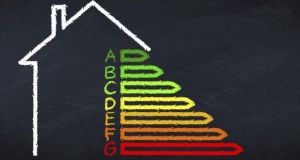 New homes and commercial buildings in Dun Laoghaire-Rathdown are to be built to low energy, passive house standards, according to an amendment to the draft county development plan.

The passive house standard which is to apply to all new commercial and residential developments, means offices and houses are likely to be slightly more expensive to build - but will be able to dispense with conventional heating systems.

Where possible, windows are oriented to the south or south west to make best possible use of sunshine, and they generally incorporate energy efficient measures such as heat pumps which can extract warmth from the ground, or even outside air.

The standards are significantly more stringent than current standards imposed on builders by the Planning and Development Act.

Members of Dun Laoghaire-Rathdown County Council made their decision to require passive house standards on all buildings after a visit to a passive house in Mount Merrion, which is built to a traditional neighbourhood design dating from the 1930s.

The house incorporates low energy systems which provide space and water heating for four adults at a cost of about €170 per year, according to owner Niall Walsh.

The heating is sourced through an air source pump which takes heat from the outside air, “like an air conditioner in reverse” Mr Walsh said. As is typical with passive homes hot air escaping from the house is passed through a heat exchanger to warm fresh air coming in.

The councillors’ visit was organised in association with the Passive House Association of Ireland which said such homes are only slightly more expensive than traditional houses to build. It will now become part of the draft development plan which is to be opened for public consultation pending a final adoption by the council.

The move was also welcomed by Jeff Colley, editor of Passive House Plus magazine who said costs need not exceed traditional levels. “Anyone building a new home has to achieve 60 per cent energy reductions and install a renewable energy system to satisfy building regulations anyway,” he said.

However Hubert Fitzpatrick, a director of both the Irish Homebuilders Association and the Construction Industry Federation, criticised the move.

Mr Fitzpatrick said the competent authority for building standards was the Department of the Environment, not local authorities, and such a move “will increase the cost of new build even further”.

Mr Fitzpatrick said house construction prices were still above the anticipated market value in many areas, having fallen 40 to 50 per cent in recent years. In this environment he said it was “wholly inappropriate” that the council would take action that would “increase further the cost of new build”. If it goes ahead he said “there will be very few houses built in Dun Laoghaire-Rathdown next year”.

The proposal, made by cathaoirleach Marie Baker, was approved by 23 votes to 14. It will now be subject to public consultation before the development plan is due to be formally adopted early next month.