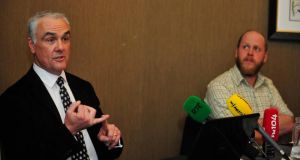 Malcolm Brown of BW Energy (left) and Paddy Massey of ReThink Pylons at a press conference in Dublin today outlining their plans for a pylon-free alternative to Grid25. Photograph: Aidan Crawley/The Irish Times

Ireland’s target of having 40 per cent of energy needs met by renewable sources by 2020 could be met in a single stroke if the Moneypoint power station in Co Clare was converted from coal to biomass, according to a UK-based energy analyst working for ReThink Pylons, one of the groups opposing EirGrid’s Grid25 pylons project.

Malcolm Brown of BW Energy today said converting Moneypoint’s three coal-fired boilers, one at a time over an extended period, would cost €380 million. Electricity generated from burning biomass (mainly wood pellets) at Moneypoint would add 25 per cent to the existing 19.6 per cent of renewable energy already produced in the State.

The two together would exceed the 40 per cent target, he said.

Converting Moneypoint would also cut out the need for the €3.8 billion cost of increasing Ireland’s windpower capacity necessary under government plans to meet the 40 per cent target, he argued.

In a report prepared for ReThink Pylons, he also argued that converting Moneypoint would remove the €2.3 billion cost of the Grid25 pylon project and the €600 million cost of the interconnector with the UK to stabilise the power network due to its planned reliance on wind.

Grid25 is a project by Eirgrid, the company that runs the electricity transmission network as opposed to the power stations that generate the current, to upgrade transmission lines in the northwest, the south and southeast, and between Northern Ireland and the Republic. Interconnector capacity between Ireland and the UK is also to be upgraded.

The plans have garnered significant opposition from local groups, however, and in January, amid fears the issue would impact on the June local and European elections, the Government asked former Supreme Court Judge Catherine McGuinness to examine whether underground cabling was a feasible alternative to pylons.

Opponents argue that the pylons, in most instances 60 metres tall, would damage the landscape and reduce the value of their property. Some opponents also cite health fears for people living close to high voltage electricity transmission.

Speaking today at the launch of his report in Dublin, Mr Brown based much of his argument on an analysis of the operation of the Drax power station at Drax in North Yorkshire in England. It is the largest power plant in western Europe and provides some 7 per cent of the UK’s energy needs but is also the single largest emitter of CO2.

Starting in 2004, Drax began a gradual conversion to biomass, burning locally sourced willow in parallel with coal. In 2012, the process of changing three of the plant’s six units to biomass began - the first of which was fired last June. A second unit is due to go fully biomass this year, and the third by 2017.

The report, Review of the Irish Government’s Strategy for Compliance with the European Directive 2009/28 , is available from rethinkpylons.org