Local community clear up batteries after cattle die in Kerry 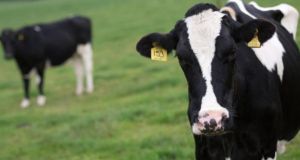 Gardaí in north Kerry are investigating the deaths of 20 cattle. Photograph: Simon Dawson/Bloomberg

Up to 70 local people turned out to carry out a search of a field in north Kerry on Friday where 20 cattle died after ingesting lead last week.

The deaths occurred after old batteries were thrown into a roadside field st Meelcon near Tarbert, where the herd was grazing.

Gardaí investigating the incident appealed again on Friday for information from the public.

Chairman of the IFA in Kerry Sean Brosnan said batteries were highly dangerous because they leaked lead. He said the cattle “died a horrible death,” while others had been blinded from the lead poisoning. Some 46 calves were in the field at the time.

Gardaí said they were keeping an open mind on whether the battery pieces were discarded carelessly by a passer by as rubbish or dumped deliberately with the intention of targeting the cattle. They are conducting door to door enquiries in the Tarbert area.

John Stack, who is the chairman of the Farm Family Committee of the North and East Kerry Development body and a former chairman of the Kerry IFA, said farmers Ned O’Hanlon and his son Patrick O’Hanlon were very upset at the loss.

The family, who also farm at Caha, Doon, had bought the land at Meelcon in recent years. Most of them were in Germany at a family wedding when the incident took place.

“The public solidarity on Friday evening was a great comfort to them,” Mr Stack said.

Mr Stack, who organised the search at 12pm on Friday, said he was astonished at how many people showed up.

The field at Meelcon was “combed inch by inch” to make sure it was safe for cattle. A nearby field belonging to the O’Hanlon family was also searched.

Mr Stack said the combers found “a lot of stuff” in the form of discarded pieces of battery in two or three different places, at least 20 yards apart.

He said a person would want “a great throw” to scatter the pieces over the ditch and so widely.

Insp Pat O’Connell of Listowel, who is coordinating the investigation, said gardaí would like to hear from the public on the incident, particularly if anyone saw the broken-up batteries being thrown into the field.

The incident occurred between July 29th and August 2nd. Most of the cattle, who comprised almost half the herd in the field at the time, died over the bank holiday weekend, with the last deaths on Wednesday.

The current loss to the farmer is estimated at just under €11,000.

Gardaí believe the cattle licked the broken up battery and contracted lead poisoning, which is almost always fatal to cattle.

Lead poisoning affects the blood, liver and neurological system, causes frothing in the mouth, staggering and other symptoms. It is a factor in the deaths of a number of cattle each year with curious calves particularly susceptible .

Gardaí in Listowel are asking anyone with any information to contact them at 068-50827.