With large tracts of bog and strong winds, Co Donegal has the most windfarms in the Stateand is home to the largest 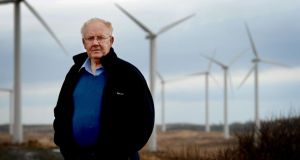 There are 179 windfarms on the island of Ireland, of which 22 are in Northern Ireland. The first one was built in the Republic at Bellacorick, in Co Mayo, in 1992. Co Donegal has the most windfarms in the State – 32 – including the largest one, at Meentycat. It has 38 turbines.

Brian Mullins is the operations manager for the Corkermore farm, owned by Energia, which runs eight farms in the State. Corkermore is north of Killybegs, in southwest Donegal.

Mullins explains the process of how windfarms are developed. “Sometimes we scout for land, and sometimes landowners approach us,” he says. “We wouldn’t go for anything less than a 100-acre site. You need 10 acres as a minimum per turbine.”

What makes land suitable for a windfarm? “A rural location, the strength of the wind, and a minimum separation of 500m from houses.” Mullins is anxious to point out some houses in the vicinity of Corkermore received planning permission after the windfarm had been built.

In the case of Energia, land is usually initially leased for five years so that if planning permission for the windfarm is refused, it is not locked in to a long-term commitment. The turbines need a concrete foundation to anchor them securely to the land, but they can also be removed at a future date: they need not be permanent features of a landscape. The energy created at Corkermore goes directly into the national grid.

It takes about a week to put in a turbine, a hollow object made of steel with carbon fibre blades. Corkermore was granted planning permission in 2005 and built in 2010. Its five turbines are 63m high and output 10 megawatts. The number of turbines does not always relate to a higher output: for instance, half an hour away the Loughderryduff farm has nine turbines but outputs only 7.6 megawatts.

“The west coast of Ireland is one of the largest wind resources in the world. The higher up you go, the higher the windspeed you get,” Mullins says, on the drive around Corkermore. This windfarm can provide enough energy to power 6,000 homes. It’s an isolated, boggy site, where turf is carefully stacked up at intervals in between the turbines. The farmers who have turbary rights there – the traditional right to cut turf – return each summer to work the bog.

The wind is not high on the afternoon we’re there. At the onsite station, Mullins uses a computer to check the speed of the blades. It’s 6m per second – the average is eight.

Up close, the turbines dominate the landscape. Each is hollow, with a ladder to the top, to help facilitate maintenance. The blades generate a prevailing undercurrent of noise at this proximity, and back out on the road, I can still hear a low thrum from the closest turbine. Contrary to popular opinion, Mullins says, the blades do not make more noise at night. However, they sound somewhat louder, as noise carries farther at night.

John Gillespie owns the Loughderryduff windfarm, not far from Killybegs. This farm, of about 200 acres, has nine turbines and was built in 2008. The lease on the land is for 25 years. Like Corkermore, it’s located in isolated bogland. “There’s money in windfarms, but the payback isn’t for eight to 10 years,” he says. “Windfarms are long-term investments, and replacement of major components is a big expense.”

Gillespie puts the cost of a turbine at €1 million per megawatt output. The steel tower of these turbines came from Scotland, the blades from Denmark, the nacelle at the top from Germany. “Turbines must contribute significantly to Donegal’s income, though rates,” he says. “We pay €60,000 a year in local government rates.”

Gillespie says of the proposed plans to build a cluster of windfarms in the midlands: “I think it’s very ambitious. It’s big by any standards. But, subject to planning, it will create a substantial amount of employment in construction. Planning is very onerous now, but wind is a natural resource and it would be folly of us not to make use of it.”

He likens his windfarm to a traditional farm, with the only difference being the harvest is energy. “If it goes ahead, the farmers in the midlands will get a very nice guaranteed annual income.”