Over 2,000 people in older Limerick housing estates advised by HSE not to drink water 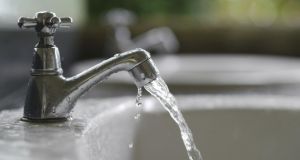 Over 2,000 people living in older housing estates on the north side of Limerick city have been advised by the Health Service Executive (HSE) not to drink their water or use it for for preparing food, following the detection of elevated lead levels.

Irish Water was aware of elevated levels of lead in water in parts of Limerick city five days before residents were advised it was not safe to drink.

Over 2,000 people living in older housing estates on the north side of Limerick city have been advised by the Health Service Executive (HSE) not to drink their water or use it for preparing food, following the detection of elevated lead levels.

Pregnant women and young children in particular are urged not to drink water suspected of elevated lead concentrations, as it can affect the development of a child’s brain.

Irish Water says it is working to replace all lead pipes in the affected areas by the end of the year.

Last Tuesday, 356 households in Kileely were issued with notices advising them that their houses could be affected by similar lead issues affecting hundreds of homes in nearby Ballynanty. Testing at a number of Ballynanty houses showed lead levels above the current statutory limit.

On July 31st last 400 households in Ballynanty were issued with the advice that “in the absence of a a specific quality test at your house, it is the prudent course of action to assume that your house may be affected by an elevated level of lead in the drinking water”.

Irish Water’s regional operations manager Katherine Walshe, today confirmed that a meeting was held with the HSE on Friday August 15th to discuss concerns over a similar issue in Kileely.

However notices advising people not to drink the water in the affected parts of Kileely were not distributed until Tuesday afternoon.

The HSE document dated April 2nd 2014 includes detailed answers to a number of frequently asked questions about the dangers posed by lead in drinking water.

When asked about the delay by Irish Water in sending out the HSE advise not to drink water in situations where elevated lead levels are detected, the health authority said it is not responsible for communicating any advice about the national public water supply.

“Communication and dissemination of any issues or advice/information with regards to the national public water supply is a matter for Irish Water,” read the statement.

Speaking on Limerick’s Live 95FM radio MS Walshe defended the length of time it took Irish Water to inform residents in Kileely insisting the operator had acted in a “timely fashion”.

“We had a meeting on Friday evening with the HSE and at that point we agreed what course of action we were going to take and we agreed that I would send out a letter to all of the residents in the Kileely area.”

“That took a day or so and to agree where standpipes and taps were going to go and even down to the very basics of writing the letter, and getting it printed and distributed,” Ms Walshe said.

The letters were hand delivered to homes by staff and volunteers from St Munchin’s Community Centre in Kileely.

When asked if she thought the delay by Irish Water in getting the notices to residents was acceptable Ms Walshe said it was a “reasonable period of time”.

“I think we did it in a very, very timely fashion. I am satisfied that we took the right course of action ... We needed to put certain pieces of jigsaws in place in terms of telling people where to go for an alternative supply and that took a few days to put together. It was a very reasonable period of time.

Irish Water said it has accelerated works to replace lead pipes in Ballynanty and Kileely and it hopes to replace all lead pipes before the end of the year.

In the meantime over 750 households must either buy bottled water or get water from a number of certified stand pipes that have been erected in the locality.

Ms Walshe could not say if people who cannot drink their water will still be expected to pay for their water when charges come into effect from October 1st.

“At the moment the Commission for Energy Regulation have put out a consultation paper on the whole issue of charges and that consultation is going on.”

“The is the idea that people will be charged generally across the country from October 1st but I don’t know that there will be exceptions we will see in the document when it comes out,” she added.

Local Sinn Féin councillor Maurice Quinlivan said that he is disappointed at the lack of clarity from Irish Water on whether or not the water in the city’s other older housing estates are free from lead contamination.

He also criticised any attempt to charge residents whose water is unsafe to drink.

“Sending water bills to residents of affected areas will simply be adding insult to injury. Any system of fairness would demand that people should not be billed for undrinkable water,” he said.