Ireland’s energy: I’m part of the energy problem – most of us are

Individual change in energy consumption is not enough to address challenges 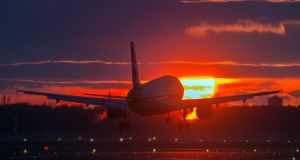 An airplane touches down: most of us accept the compelling scientific evidence that our carbon-burning culture is not sustainable

I spend quite a lot time flying around the globe and driving long distances. I’d like to be able to claim I burn all this carbon solely to write about environmental restoration projects that, among other benefits, “sink” carbon in the earth rather than releasing it into the atmosphere.

But there have been quite a few holidays, too, along with the worthy work trips . . . and we’ve a second home easily accessible only by car . . . so, hands up from the outset, I’m part of the energy problem. Most of us are.

Most of us, in fact, are living out a consumer version of a disastrous double-bind, very well captured in Garrett Hardin’s troubling 1968 essay The Tragedy of the Commons.

Hardin illustrated this principle in a simple story. Let’s say 10 farmers have equal access to a pasture that can support 100 cows before it begins to degrade through overgrazing. From a rational and social perspective, each farmer should put no more than 10 cows out to graze.

But the dominant capitalist- consumer economic model for our societies, first imagined by Adam Smith 240 years ago and now accepted across the entire globe, tells the farmers they should not think or act from a social perspective.

Smith argued that, in a “free” economy, individuals should act only to maximise their own profit. To salve our rational consciences, Smith claimed the “invisible hand” of the market then magically transforms our private vice of reckless consumption of resources into the public good of more cheap products and services for everyone. Greed is good.

“Therein is the tragedy,” concludes Hardin. “Each man is locked into a system that compels him to increase his herd without limit – in a world that is limited. Ruin is the destination toward which all men rush, each pursuing his own best interest.”

Substitute consumption for production in this scenario, and you may recognise yourself in this story as an energy user. We each believe that we need to drive to the shops today, or that we can’t really afford to insulate our home this year, or that our health demands a sunshine holiday this gloomy winter. Our tiny personal emissions will hardly make any impact on climate change, so why should we make sacrifices?

At the same time, most of us accept the compelling scientific evidence that our carbon-burning culture is not sustainable. The Earth’s atmosphere is a universal commonage, and our collective production and use of fossil fuels is degrading it more every day, threatening to make this the century of catastrophes. The sum of our current individual behaviour will indeed be social ruin.

Secondly, technology will not be the magic bullet that solves such problems, though it may mitigate them in the short term. Each energy solution creates new environmental problems.

So we all need to change our lives and use less energy, right?

Yes indeed, but the problem is actually much more challenging than even that very big ask. Individual reductions in energy use are useful and ethically admirable, but they will not stop the tragedy of the commons playing out.

We urgently need to change the consumerist economic model that dictates our values, whatever beliefs we profess.

The odds against our making such a big shift are daunting, especially given the ominous speed at which we are changing the climate. Equally extraordinary changes in values, from slavery to democracy, for example, have indeed happened. But they have taken a very long time.

Whether our species has the evolutionary smarts to adapt to this challenge remains an open question. No question is more important, yet most countries barely have it on their political agendas. Recent history suggests we can’t rely on our current political parties to make any visionary changes. That leaves it up to you and me.