Ireland has never been so clean - Ibal 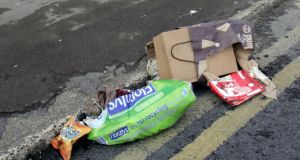 Ireland’s cities and towns are overcoming the State’s chronic litter problem with record levels of cleanliness – particularly in Dublin – according to the latest survey commissioned by Irish Business Against Litter (Ibal).

Ibal said it was particularly pleased with the results of the survey of 42 urban areas, many of which it said have never looked so clean.

Among the winners was Cavan, which was classed as Ireland’s cleanest town, ahead of last year’s winner Kilkenny.

Dublin
Dublin, previously fifth from bottom, was ranked “cleaner than European norms” and is now in 14th position. The report praised the shopping streets of Grafton Street, Henry Street and O’Connell Street, noting that “Parnell Street, in particular, has improved considerably”. Custom House Quay and Bord Gáis Energy Theatre and environs were “beautifully presented and maintained”, it said.

Waterford city was in third place, making it a less littered city than European averages. Limerick city and Cork city were both successful in attaining “clean to European norms” status.

However, while Dr Tom Cavanagh of Ibal praised the results as “a turning point” – particularly for Dublin, there were still some problems.

High-density, low-income urban areas continue to suffer from widespread litter, such as Dublin’s north inner city, the survey’s only “litter blackspot”. An Taisce reported the North Strand as suffering “long-term abuse and neglect”, while “dumping on a widespread scale” blighted the Summerhill area.

“All manner of rubbish had accumulated” on Portland Row, with “graffiti”, “derelict sites” and “large accumulations of litter” characterising Upper Sheriff Street. On the morning of Michelle Obama’s visit, the inspector noted the area around Samuel Beckett Bridge, an access route to Dublin airport, to be “in a terrible state”.