Protests at proposed access route in historic centre of city 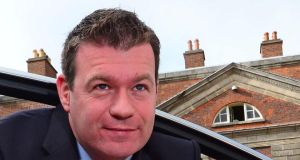 
Hundreds of people marched through the centre of Kilkenny on Saturday in a second major demonstration protesting against plans for the city’s controversial central access route.

Organisers of the march to stop the €18 million scheme, which would involve building a new road and bridge in the historic ecclesiastical centre of Kilkenny, said they were overwhelmed by the turnout.

A crowd estimated by the organisers at more than 700 walked through the busy streets to a rally at the Parade in front of Kilkenny Castle.


“Rethink project”
Speakers from heritage and community interests called on Kilkenny County Council to rethink the project by first completing the remaining unbuilt section of the city’s ring road.

The central access route was approved by An Bord Pleanála in 2009 despite objections from the Heritage Council, Kilkenny Archaeological Society, An Taisce and a number of community groups.

It is currently held up by archaeological excavations at Vicar Street, near St Canice’s Cathedral, where three Victorian houses are due to be demolished, including one with remnants predating 1700.


“Ignored” EU policy
The Campaign to Complete the Kilkenny Ring Road group, which organised the protest, claims the county council “ignored” national and EU policy on transport as well as archaeological concerns.

The group handed over 2,000 written and 7,000 online signatures to the city’s mayor calling for the road to be completed as a priority. A complaint has also been made to the European Parliament.

Last month, Minister of State for Transport Alan Kelly said his department had informed the council that it could not make up a shortfall in capital funding to complete the access route. Green Party councillor Malcolm Noonan, the only member to oppose the scheme, said they were willing to sit down with council officials to outline alternatives and highlight deficits in the traffic projections.