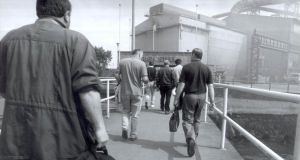 Irish Steel workers on their way into the plant on Haulbowline in Cork Harbour in the 1990s. File photograph: Alan Betson/The Irish Times 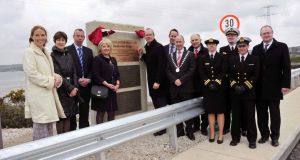 Minister for the Marine Simon Coveney has said the completed upgrade of bridges to Haulbowline in Cork Harbour will pave the way for the continuing clean-up of part of the island.

Mr Coveney said the upgrade work on the two Haulbowline bridges was vital to facilitating the clean-up of the former Irish Steel plant on the island which is going ahead later this year.

“And once completed, the Haulbowline Island Remediation Project will usher in an entirely new phase of this island’s long and distinguished history,” he said.

The clean-up of the former Irish Steel site on the island represents “tangible evidence of the Government’s commitment to Cork Harbour and to the wider marine sector,” he added.

Mr Coveney was speaking after he officially reopened the two bridges linking the mainland at Ringaskiddy to Haulbowline Island in Cork Harbour on Friday afternoon.

The bridge upgrade had been identified by Cork County Council as vital to provide safe and efficient access for the considerable traffic expected on the bridges during the remediation.

Cork County Council signed a €1.85 million contract with L & M Keating in May 2014 to upgrade the two bridges leading on to Haulbowline Island from Ringaskiddy.

One of the bridges links Ringaskiddy to Rocky Island and the second links Rocky Island to Haulbowline, which is also home to the Irish Naval Service.

The upgrade work will allow the removal of a 25-tonne weight restriction on the nine-span bridge, which is 207m long, and the second bridge which has eight spans and is 146m long.

Some €54 million has been spent since 2004 on demolishing and clearing the former steel plant, from a total budget of €92 million set aside by government for the remediation.

The plan to convert the nine hectare site into a green amenity area will involve stabilising the east tip, which contains a variety of contaminants associated with steel production.

The remediation plan drawn up by a number of consultant firms will involve stabilising the waste by sealing its perimeter and top surface before covering it with membranes and soil.

It’s hoped the remediation work expected to start later this year will take about two years to carry out, with a completion date set for late 2017/early 2018.

In 2011, Mr Coveney asked for the site to be transferred from the Department of the Environment to his department, and Cork County Council was appointed to oversee the work.