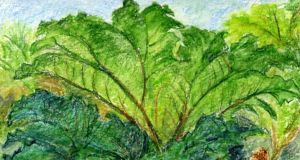 Spring doesn’t work without rain. After 17 days without a drop – such magical mornings! – a first millimetre in the rain gauge offered hope to earthworms hiding deep in their burrows, to increasingly desperate blackbirds, and to neighbours with meadows grazed to the nap by heavily pregnant ewes.

Among the green life waking up – indeed, well ahead of most of it – is the west’s irrepressible, alien giant, the gargantuan Chilean rhubarb-that-isn’t, Gunnera tinctoria . Years after its indictment as an ecological menace, this huge plant still creeps invasively along the cliffs, streamsides, roadsides and damp meadows of the western coast, shading out native vegetation and building up huge seed banks to crowd out everything else. Eradication schemes are hard tested, as fresh leaves sprout from the boneyards of partially poisoned rhizomes and the layered seed banks wait their turn to take over.


Cantilevered umbrellas
Gunnera is indeed a splendidly ornamental species, hoisting cantilevered umbrellas of leaf blades up to two metres high and raising, at their heart, great truncheons of tiny flowers – hundreds of thousands tightly packed together and producing, at one Irish location, about 750,000 seeds per plant. With a dauntingly ancient fossil history, gunnera is one of the few flowering plants to fix its own nitrogen through hosting a toxic cyanobacteria in its cells.

Late in the19th century, this “very noble” plant, as Darwin called it, took the fancy of big-house landlords across these islands. Corraun House, on Achill, was modest enough when Charles Scrase Dickens (no relation) built it, in the 1830s, but its grounds eventually needed two gardeners. By the turn of the century it could boast all manner of exotics, including Gunnera tinctoria and Reynoutria japonica , the now-infamous Japanese knotweed.

In Ireland, gunnera spreads largely by its creeping surface rhizomes and the scatter of plant fragments, rather than by birds eating the seeds. But by 2008, it was recorded at 1,168 locations on Achill, forming dense thickets on marginal agricultural land and fringing the island’s bog roads with its enormous leaves.

Such manifest invasion spurred Mayo County Council to action with glyphosate herbicide, while the new owners of Corraun House, an English couple with plans to restore the gardens, despaired of help in battling with Japanese knotweed.

Gunnera has priority in the national action plan, scoring 19 out of 25 points for its impacts on biodiversity and landscape. Invasive Species Ireland, which weighed up the risks, was thinking also of Ireland’s conservation obligations under the EU’s habitats and water framework directives.

The eradication programme has extended beyond Achill to Clare Island and the rainy slopes of Killary Harbour, below Leenane, where Mayo and Galway meet, and where the botanist Robert Lloyd Praeger noted abundant naturalised stands of gunnera as long ago as 1939. (He mistook it for the closely similar Gunnera manicata .)

The plant’s need for water, humidity and frost-free winters has kept it largely to the west coast and its hinterland, and the higher rainfall of climate change and a wider abandonment of marginal farmland intensify the likelihood of an exponential invasion.

An impressively thorough study of the plant and the difficulties of control has been published in the Journal of Ecology by Margherita Gloria of the University of Glessen, in Germany, and Bruce Osborne, professor of plant ecophysiology at University College Dublin.

The gunnera problem is globally shared, notably with Britain and, predictably, New Zealand. In the Outer Hebrides, for example, the plant has formed large stands of several hundred square metres, and invasion of coastal cliffs in New Zealand is menacing the native vegetation.

In Ireland, gunnera both shades out the native plants and takes over their diverse communities by crowding out their seedlings – its own can emerge at 30,000 per square metre – and favouring those of agricultural weeds such as rushes.

One community especially vulnerable, it seems, is low, scrubby woodland of sally willows, with its moist undergrowth of plants such as white-flowered bedstraw, water mint, buttercups and angelica. There’s plenty of this sort of thing in the west, and nothing we’d miss much, one might think. But it’s part of Ireland’s native ecology, with its own potential plant succession, and botanists find it worth defending for the future, uncertain as this may be.

Spraying glyphosate wholesale is too wildly indiscriminate a poisoning, but the herbicide (Roundup) works well, if laboriously, when painted on to cut stems or injected into the rhizomes. Gunnera, however, can be slow to breathe its last.

Meanwhile, Invasive Species Ireland, helped by the National Botanic Gardens and county-council heritage officers, has discouraged Irish garden centres from offering the plant, despite the Award of Garden Merit to Gunnera tinctoria by the Royal Horticultural Society as recently as 2006.