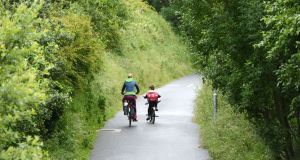 Greenways, such as the one in Westport, are traffic-free paths dedicated to cyclists and walkers. Photographer: Dara Mac Donaill

The promoters of a plan to turn a disused 22km stretch of rail line in the southeast into an amenity for walkers and cyclists have said that, if the project proceeds, they would be honouring the railway’s 100-year-old heritage rather than tearing it up.

Wexford County Council and Kilkenny Leader Partnership, which are among the backers of the plan, said that, for cost reasons, there was no short- or medium-term prospect of the line being restored as a heritage railway.

The €3 million greenway project for the former line between New Ross and Waterford, the majority of which runs through Co Kilkenny, has been criticised by the Suir, Nore and Barrow Railway Heritage group, which wants to see the line redeveloped as a tourist attraction.

Group member Eddie Hannon accused the authorities behind the proposal of attempting to tear up more than a century of history.

“We wanted to reopen the railway line as a heritage railway, and no question of any walkway,” he told The Irish Times. “I have nothing against walkways, far from it. I have my own bike, and cycle it. I’m not against a walkway as such, but against any heritage being ruined.”

The line between New Ross and Waterford has not been used for commercial purposes for 20 years and has not carried a passenger since 1963. Greenways are dedicated cycling and walking paths that pass through the countryside while linking towns.

Declan Rice, of Kilkenny Leader Partnership, said that the greenway plan was not a case of disrespecting history.

“I don’t think we’re tearing anything up,” he said. “Tracks may be raised, and that’s a structural thing, but we’re talking about making use of the heritage that’s there.”

Railways are “a good idea”, he said, if they can be implemented and operated, but “to be honest, we don’t see any prospect of [a heritage railway] happening in the immediate or medium term”.

“In my opinion, there’s millions of euro worth of infrastructure, blood, sweat and tears, literally rotting away . . . It’s not feasible to put a track back on it.”

Mr Hore added that action needed to be taken on the line shortly, as “in another 20 or 30 years we won’t be able to”.

Unlike what the heritage people are saying, what we think is that we’re honouring 100 years of heritage. Literally, at the moment, it’s completely overgrown.”

He said that walking and cycling were worth up to €300 million annually to the Irish tourism sector, and that the region hoped to capitalise on the demand.

Backers have embarked on a pre-planning consultation phase, holding public meetings and talking to anyone with “concerns”, such as landowners close to the Iarnród Éireann-owned line.

The rail company has no objection to the plans.