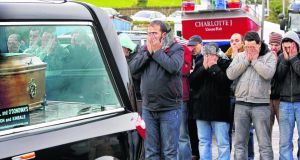 Egyptian colleagues grieve and pray beside the hearse containing the body of Tit Bonhomme crew member Attia Shaban at the pier at Union Hall in west Cork after his body was recovered on January 19th, 2012. Photograph: Julien Behal/PA Wire

Fishing skippers will be able to apply for grant-aid for safety equipment as one of a series of Government measures announced today aimed at reducing deaths at sea.

Personal locator beacons, “float-free” emergency position indicating radio beacons (EPIRBs) and auto-pilot alarm systems will qualify for grants under the scheme due to be rolled out by Bord Iascaigh Mhara (BIM), the State’s sea fisheries board.

“Enhanced” safety training for skippers and crews, and establishment of a new high level working group on safety in the fishing industry are other highlights of the scheme, announced by Minister for Marine Simon Coveney and Minister for Transport Leo Varadkar in the west Cork fishing village of Union Hall.

The village was focus of the search for the five men who died in the sinking of the Tit Bonhomme fishing vessel after it ran up on rocks in the mouth of Glandore harbour in January 2012. None of the six crew had time to put on an immersion suit which might have increased chances of survival in the water, and only one of the five who drowned was wearing a personal flotation device (PFD).

The sole survivor, Egyptian crew member Abdelbaky Mohamed (43), was trying to put on a lifejacket when he was washed out of the wheelhouse and managed to swim to shore.

Skipper Michael Hayes (52) from Helvick, Co Waterford, crewmates Kevin Kershaw (21) from Clonakilty, Co Cork, and Wael Mohamed (35), Attaia Shaban (26) and Saied Ali Eldin (22), all from Egypt, died in the sinking. The sinking prompted an extensive search over 26 days by the statutory agencies, the local community and volunteers.

A review of the 999 telephone emergency call service is currently under way, after it was revealed at the inquest that two emergency calls were made from the vessel, and that the Irish Coast Guard was not aware at the time of the first call.

Most of the grant-aided safety equipment announced today will be made mandatory, according to the two Ministers.

The new working group will focus on improving safety on smaller vessels in particular, and will be chaired by Irish Water Safety chief executive John Leech, Mr Coveney said.

Mr Varadkar said it was “ appropriate” that details of the new maritime safety initiative targeted at the fishing industry were being outlined in Union Hall, as “those tragic events of January 2012 left a huge impact on the nation as a whole, and reminded the nation of the dangers of the sea”.

He noted that some 55 deaths occurred in marine incidents over the past five years, with 15 of these occurring just last year alone.

Mr Coveney said he knew that this issue was “painful” for those who have lost friends and loved ones at sea.

“However, I hope that they can gain some comfort from the knowledge that something concrete is now being done,” Mr Coveney said. “ The aim is to save lives, we have to see a culture change in our attitudes to safety, and we all have responsibilities in seeing this common held desire become a reality,” he said.

Mr Varadkar said he believes most of the deaths which had occurred were “preventable”.

“The bottom line is that we can pass any law we like, but if it is not enforced and we do not have a culture of zero tolerance in regard to non-compliance, we will continue to lose loved ones at sea in the coming years,” he said.