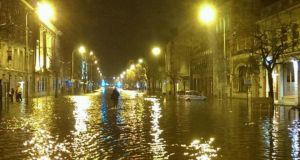 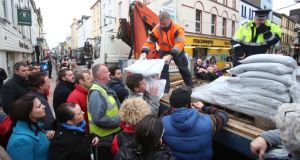 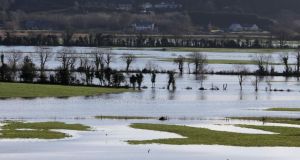 A view across flooded fields as the River Barrow burst its banks overnight. Photograph: Niall Carson/PA

Fresh flooding has hit Cork city centre tonight. Water washed down the South Mall and onto Oliver Plunkett Street in a similar way to yesterday morning when flood water caused thousands of euro worth of damage.

Gardaí began closing off large sections of the city centre as both the North and South Channels of the River Lee began to burst their banks as high tides and strongly south easterly winds prevented water exiting into the harbour.

Union Quay, George’s Quay, Sullivan’s Quay and Wandesford Quay along with Morrison’s Island all began to flood before 8pm when the south channel burst its banks while the north channel also overflowed quay walls and flooded Kyrl’s Quay and Cornmarket Street.

Flood waters then began to flow into the South Mall and from there along Pembroke Street, Marlborough Street, Cook Street and Princes Street on to Oliver Plunkett Street where traders bore the brunt of the damage yesterday.

High tide in Cork was at 8.53pm, but fears that flooding tonight might be worse than that which hit the city centre early yesterday morning and damaged dozens of shops and businesses have subsided.

Met Éireann earlier issued an orange weather warning as yet another Atlantic storm depression approaches the country threatening to increase the potential for further flooding along the coastline.

It issued the orange status wind warning along the east and south-west coasts, in Dublin, Louth, Wexford, Wicklow, Waterford, Meath, Cork and Kerry.

Council teams are on standby in the south and east as a combination of high tides, storm-force winds and wintry showers are predicted to bring mean wind speeds 65 to 80km/h, gusting 90 to 115 km/h, at times, along southern and eastern coasts.

The orange warning is valid from 3pm today until 9am tomorrow.

Heavy rainfall is also expected in Dublin, Carlow, Kildare, Kilkenny, Wexford, Waterford, Cork, Kerry and Tipperary. Met Éireann is predicting about 25-45 mm of rain between this afternoon and Wednesday night.

The Taoiseach today said a fund of €15 million had been put in place to deal with the immediate humanitarian issues arising from the recent flooding. This is in addition to a €10 million fund that is already in place and furthr funds may be provided when the damage is better assessed.

Cork city manager Tim Lucey this evening urged business people in the city centre to remain in their properties to protect them against flooding.

The council said it had distributed about 2,000 sandbags to homeowners and business people in low lying areas of the city.

Train networks are still affected by yesterday’s flooding with bus transfers in place between Limerick and Ennis . Normal Waterford/Dublin and Waterford/Limerick Junction services have resumed.

Coastal communities in Waterford and Wexford were again on standby tonight as they waited to see what damage would be inflicted by the high tide with areas along the coast such as Dungarvan, Waterford city, Tramore, Arthurstown and Ballyhack.

New Ross was also readying itself for high tide last night after a day of clean-up operations following flooding from the River Barrow.

Have you been affected by the bad weather? Please email updates and images from your area to Irish Times news.