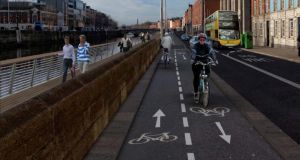 Four route options have been developed, three of which involve a two-way riverside path along the north quays of the Liffey

Plans for a segregated cycle route along the river Liffey in Dublin city, from Heuston station and the Phoenix Park in the west to the Point Village in the east, will be available for public consultation within weeks. Four route options have been developed, three of which involve a two-way riverside path along the north quays – the sunnier side of the river.

Dublin City Council chief executive Owen Keegan last June announced plans for a Liffey cycle route which would reduce the space for general traffic on the north quays. This was met with opposition from some motorists and city centre retailers who said it would worsen daily gridlock along the quays, particularly during morning rush hour.

Consultants engaged by the council had initially considered 13 route options, some of which included the removal of traffic lanes. However, none of the four shortlisted routes involves taking lanes away from cars, but some do involve partial diversions of traffic away from the riverside.

The first of the northside routes would involve a segregated path next to the riverside which would include a boardwalk over the Liffey at Ellis Quay, from the James Joyce Bridge, the narrowest part of the route. A second option also uses the two-way riverside route, but instead of a boardwalk, buses would be diverted on to Benburb Street to preserve the space for car traffic.

The third northside route, Croppies Acre Park in front of the National Museum at Collins Barracks, would be relocated down to the riverside with traffic diverted around the park on to a new road, with a bus lane and a general traffic lane next to the Luas line.

The fourth option involves upgrading the existing cycle lanes on the north and south of the river. The lanes would remain next to the buildings, instead of being next to the quay wall, but they would be segregated from traffic for most of their length, with the exception of at bridges and junctions .

To keep space for cars, changes would have to be made to the existing riverside footpath. This would, along some stretches, necessitate the felling of mature plane trees, similar to those which grew along the central median of O’Connell Street before its redesign.

Joe Seymour, of consultants Aecom, who has designed the route options with council engineers, said the trees had in places made the footpath almost unusable and had caused damage to the quay walls.

The options were presented to the council’s transport committee without an indication of their cost. They will be available to view from March at cycledublin.ie. Public submissions will be used to determine the preferred option.