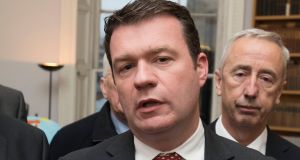 Alan Kelly has said he plans to seek an increase in Ireland’s allocation to the Green Climate Fund.

Ireland spends almost 200 times more on fossil fuel subsidies than it plans to contribute to the UN’s Green Climate Fund, a ratio that is much worse than other developed countries, according to data from clean energy campaigners.

New analysis released at the COP21 climate change conference shows that G7 countries along with Australia spend on average 40 times more on subsidies for fossil fuel production than they plan to contribute to the UN’s Green Climate Fund.

The Government has to date pledged €2 million to the fund, which is aimed at ameliorating the worst effects of climate change in developing countries. Minister for the Environment Alan Kelly said this week he planned to seek Cabinet approval for an increase in this allocation.

France has the lowest ratio of subsidies to pledged funding at 6:1 while Australia has the highest at 113:1. Ireland was not included in the study but Friends of the Earth estimates that the fossil fuel industry here benefits from about €386 million annually in subsidies.

This figure is made up of the share of the public service obligation (PSO) levy allocated to subsidising peat and securing gas supply, totalling €169.2 million this year, combined with fuel allowance payments to low-income households of about €217 million annually.

The PSO levy is a charge paid by all domestic electricity customers to support domestic energy supply. Residential customers pay €5.01 a month excluding VAT, a sum that is itemised on electricity bills.

Kate Ruddock, policy and campaigns manager at Friends of the Earth, said fuel allowance payments were regarded in other European states as a fossil fuel subsidy, although she acknowledged that different methodologies could be used in different studies.

Concern over the role of the fuel allowance as a fossil fuel subsidy is shared by the Society of St Vincent de Paul, whose head of social justice, John-Mark McCafferty, said there was a need to move towards “sustainable and affordable energy”.

While the organisation wished to ensure that people on low incomes were warm in their homes, “fuel subsidies can’t stay as they are in the post-COP21 world”. Money would be better spent on insulation and retrofitting, he said.

The study of G7 nations, compiled by Oil Change International (OCI) and Climate Action Network (Can) Europe, shows that Australia, Canada, France, Germany, Italy, Japan, the UK and the US together hand out about $80 billion (€74 billion) a year in public support for fossil fuels, while their total pledges to the climate fund only amount to $2 billion per year.

In better news for Ireland yesterday, the country ranked in 12th place in a survey of the climate change performance of almost 60 countries worldwide, released by Germanwatch and Can Europe.

Given that the first three places are vacant, because none of the countries surveyed are said to be doing enough to reduce their greenhouse gas emissions, Ireland’s position is effectively ninth place on the list.

The highest place is occupied by Denmark for the fifth consecutive year, followed by Britain, Sweden, Belgium, France, Cyprus, Morocco and Italy.

Although European countries still rank high, profiting from their early start in development of climate policies, the EU now “risks falling behind” as other countries “invest in renewable energy on a massive scale”, the authors say.