Public hearings to be reflected in report by Oireachtas environment committee 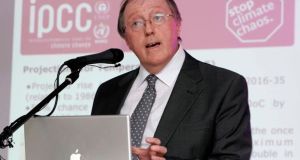 The Oireachtas Environment Committee is expected to finalise its report next Tuesday on the Government’s proposed climate change legislation, with recommendations for setting stronger targets to reduce Ireland’s greenhouse gas emissions.

The report is being compiled by Prof John Sweeney, NUI Maynooth, in the wake of the latest assessment by the UN’s Intergovernmental Panel on Climate Change (IPCC). The UN experts found the evidence for global warming was “unequivocal”.

Prof Sweeney, an Irish contributor to IPCC reports, is on record as saying the Climate Change Bill needs to set out an “effective strategy for emission reductions” as well as provision for “independent oversight and monitoring of progress”.

The committee held a series of public hearings last July, with presentations from 26 “stakeholders” ranging from heritage body An Taisce to employers’ body Ibec. It is widely expected that the weight of their evidence will be reflected in the committee’s final report.

“The hearings were constructive, positive and with a serious level of engagement by TDs and Senators, along the lines of the Oireachtas hearings on the X case legislation,” according to Oisín Coghlan, director of Friends of the Earth Ireland.

A meeting of the environment committee has been scheduled for next Tuesday, when members will have an opportunity to table amendments to Prof Sweeney’s report.

After the committee signs off on it, the final report will go to the Government.

“Whether the Government takes on board its recommendations will be a big test of its commitment to political reform, as reiterated in the Seanad referendum campaign,” said Mr Coghlan.

“If there is political reform, they should accept the recommendations.”

Minister for the Environment Phil Hogan is on record as saying that the Oireachtas committee’s report will be a key input into the Government’s final decisions on the precise terms of the Climate Change Bill and what targets it will set.

The “key weaknesses” in the proposed legislation, according to Mr Coghlan, are that it does not set targets for 2050 – “like, a car without an engine may look good but won’t get you where you want to go” – and a lack of independence for the advisory body.

The Minister has spoken about setting a 2050 goal to achieve a low-carbon economy, and said his working definition of what this would mean was near-zero emissions for buildings, energy and transport and “carbon neutrality” for agriculture.

“The Bill needs to have a numerical [emissions reduction] target for 2050, and we think 80 per cent is fair because the EU’s is talking about 80 to 95 per cent,” said Mr Coghlan.