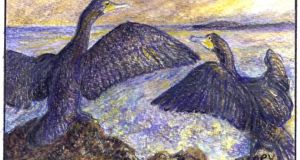 On the move: cormorants are heading inland. Illustration: Michael Viney

The limply outstretched wings of the just-about-upright cormorant can express how many people feel at the end of another hot day. But they can also challenge one’s sense of fitness in nature; diving birds surely shouldn’t have to do that.

But this is to judge from Irish experience alone. Move to Florida and there are subtropical cormorants, the scrawny anhingas, or “water turkeys”, doing much the same, along with pelicans, brown and white. Elsewhere, there are storks and turkey vultures that, while not needing to swim underwater, might also imitate broken umbrellas.

Wing-spreading can have different reasons in different birds but our northern cormorants are just doing the weirdly obvious and drying their wings. Letting themselves get wetter does let them dive deeper and stay under for longer. This is not from any lack of oil from the birds’ preening glands. In the structure of their feathers, the outer layers let water in, but the inner layer holds air for insulation. This let the so-called Great Cormorant spread northwards into colder waters, spreading its wings to dry even in Greenland.

Ireland’s native subspecies of Phalacrocorax carbo is the Atlantic cormorant, also the bird of the north of France, Britain and Norway. But mainland Europe has another subspecies, slightly smaller, its plumage glossed blue-green rather than purple, and with sinensis tacked on to its name. The two kinds together are now more numerous than at any time in the past 150 years – at least 520,000 are wintering in Europe – and this dramatic growth, overwhelmingly of sinensis, has led to fierce conflict with fish farmers and demands for EU-wide control.

In spring and summer, many of Ireland’s cormorants are gathered at or around their breeding grounds within commuting distance of Dublin Bay. About 2,000 pairs nest on islands off the north of the county – St Patrick’s, off Skerries, on Lambay, and also on Ireland’s Eye. Their nests are spaced out on steep slopes above cliffs, or on rocky terrain. On Bray Head, a rare mainland colony, keeping to the cliffs gives security from foxes and rodents, as do trees on islets in some lonely lakes in the west.

Even with protection under the Wildlife Act, our cormorants have flourished only modestly, with sharp declines at some traditional breeding colonies, especially on west and south coasts, and increases at others. The past 50 years, however, have seen a marked move to inland waterways in winter, much to the concern of anglers in the midlands.

One of the largest and best-studied cormorant colonies is on Little Saltee off Co Wexford, where the birds build their bulky nests on top of the old stone walls that snake through the island’s abandoned fields. They return each year to this undisturbed habitat, and the colony has been stable, at about 300 breeding pairs, for decades. Indeed, counting the birds, ringing their young and parsing what they eat has gone on since 1960, making it one of the longest-studied colonies in western Europe.

Baby cormorants are not the most attractive chicks to hold, however tenderly. However, as Dr David Cabot has written, “The immatures, somewhat repulsive and mildly reptilian, are easy to catch while still in their nest.” Along with ringing them, year after year, he has helped to analyse the gobbets of fish regurgitated by the parents into the gaping beaks of the young (don’t ask me how this was retrieved). Three-quarters was different kinds of wrasse, the local rock fish, and another 18 per cent was eel, so that local fishermen have had little to complain of.

One big reason for the continuing stability of the Little Saltee colony, rather than expansion to match the local food supply, is that most of the birds migrate southwards in autumn into northern France, Spain and Portugal, where a good many are shot and their rings returned to Ireland. Mass shootings of cormorants have been a common, if largely futile, response to the often quite extraordinary densities of the birds on the Continent. They are drawn in hundreds to well-stocked angling lakes and intensive fish-rearing enterprises.

In Ireland, the traditional enmity of anglers for their cormorant competitors has been sharpened by agitation in Europe and the explosive spread of sinensis. A study for Inland Fisheries Ireland, published in 2011, assessed the threat to salmonids in four widely separate river systems: the Owenea in Co Donegal, the Slaney in Co Wexford, the Ballynahinch in Co Galway and the Suir in Kilkenny and Waterford.

On average, the cormorants were low in numbers and actually grew fewer at the critical period of salmon smolt travelling to the sea. Diet samples put ballan wrasse at the top of the menu, closely followed by the coarse perch and roach. Only at a colony 50km inland did trout and salmon reach one-fifth of the food. Nonetheless, three-quarters of anglers thought the cormorant “problem” was increasing and that something ought to be done about it.