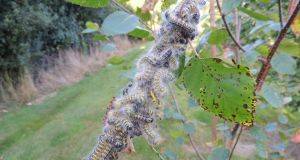 Eyes on nature: the birch-sawfly caterpillars in Paul Butler’s garden 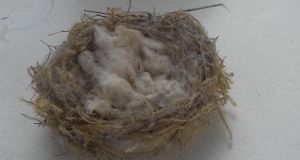 Eyes on nature: the nest that Brigid Murtagh’s friend found on her lawn

I walk along the Royal Canal most days, and lately I was shocked to see a dead adult mute swan with its neck missing. The bank was full of feathers, and the body was in the water. Later I spotted an otter very close to where the swan met its fate. Would the attack have happened at night, and would the otter be the culprit?
Pat Good
Clonsilla, Dublin

The culprit could well have been an otter or a mink. And the attack most probably happened at night.

This year I left food out for the large group of wood-pigeon fledglings in my garden. Last month the sight nearly left my eyes when I looked out and saw the garden littered with feathers. Smack in the middle was a peregrine falcon with her hooked beak and big claws, wearing feather bloomers, pulling bloody innards out of one of the fledglings. The nerve of it.
Deirdre Owens
Clontarf, Dublin

Can you identify the little nest in my photograph, which a friend found on her lawn recently? Why do you think the brood died in the nest?
Brigid Murtagh
Bray, Co Wicklow

Many birds’ nests are similar. The brood would have died from starvation because the parents abandoned the nest or were prevented from returning to it.

I found the group of caterpillars in my photograph eating away on my Himalayan birch. My guess was small tortoiseshell. I moved them to the larger trees.
Paul Butler
Stradbally, Co Waterford

They are the larvae of the birch sawfly, which in those numbers can strip a tree very fast. You’d have been better destroying the lot of them if there were not enough birds around to eat them.

1 Covid-19: Travel restrictions to stay and 'green list' put on hold amid fears of second wave
2 Bobby Storey: The IRA's planner and enforcer who stayed in the shadows
3 Q&A: How close are we to having a Covid-19 vaccine?
4 Miriam Lord’s Week: Martin sparks Olympian levels of whingeing in Fianna Fáil
5 Transgender Cork farmer (65) surprised at positive response to telling her story
Real news has value SUBSCRIBE

Coronavirus: Donations to Catholic Church down 80% 04:35
Covid-19: Travel restrictions to stay and 'green list' put on hold amid fears of second wave 04:05
Friends of Sinn Féin raises a further $294,790 in the US 03:01
Traditional census may be replaced by online data collection 02:30
Bookings are coming, says Cork travel agent, ‘but it’s a trickle’ 01:02