Agency details why utility not viewed as independent, says €100 grant is State support 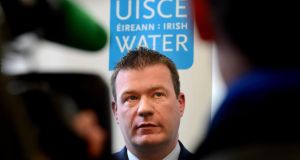 Eurostat, the EU statistics agency, has comprehensively rejected the Government’s case to classify Irish Water as an independent entity, according to its detailed ruling published on Thursday.

The level of charges households are being asked to pay are outlined as a key issue by Eurostat, as is the level of non-payment and the risk that creates to Irish Water’s revenues.

The Irish Central Statistics Office has pointed out that the ruling has come under a new statistical procedure which is open to various interpretations and said it will be discussing the issue with Eurostat, ahead of the next annual examination in 2016.

However the Eurostat’s detailed note outlines a series of issues which led it to rule that Irish Water would currently fail the test.

The outline Eurostat decision, published on Tuesday, indicated reservations it had about the way consumers are being charged. This is underlined in the latest detailed decision, “domestic consumers are to be charged at significantly less than cost” for their water, it points out.

The European body also differs with the CSO on the appropriate classification of some of the payments made by the exchequer to Irish Water – particularly to compensate for the allowances given to children.

Eurostat also argues that the €100 household water conservation grant – which the Government and the CSO argued are separate from Irish Water’s finances – should be counted in assessing the level of exchequer support given to the agency.

It also says the capping of charges to domestic consumers is a problem in terms of classifying the body as off balance sheet.

While the Government and the CSO had argued that the issue of non-payment of charges should not factor in the initial decision on Irish Water, Eurostat said this must be counted in.

It says that the fact that consumers are not used to paying for water, and that less than 50 per cent paid the first three-month bill, means this factor has to be taken into account.

This further reduces the measure of Irish Water’s commercial revenue in Eurostat’s view.

Irish Water gave Eurostat estimates of how much revenue from domestic charges it expects to collect this year and how much by 2021, but these figures are redacted in the published letter.

It told Eurostat that it expected “most unpaid amounts” to be recovered within five years “ and only a small proportion to be written off.” A flat penalty system of “€15 or €30 “is foreseen for late payment, it says.

Much of the financial data in the Eurostat letter to the CSO about Irish Water’s overall finances is also redacted. To qualify as an independent entity under the so-called “market corporation test”, Irish Water had to earn half its revenues from commercial sources.

The CSO calculated it met the rule with a 54 per cent ratio. Taking the most favourable view, Eurostat calculates a figure of 48 per cent, but when likely non-payment is taken into account it falls further. Eurostat also disputes the view taken by the CSO of Irish Water’s cost of capital, arguing that if a more realistic view were taken, the ratio could fall as low as 27 per cent.

As well as the statistical calculation, Eurostat also says the Irish Water structure is tied to, and controlled by, the Government.

The entity “merely reorganises” a service previously delivered by local government. Government appoints directors, has set a cap on consumer fees and requires Ministerial consent to undertake a range of activities.

In summary the powers which the Government has to control Irish Water “look exceptional,” according to Eurostat.