ESB to tear down Dublin block that ruined ‘Georgian Mile’

New development will not see restoration of Georgian facade 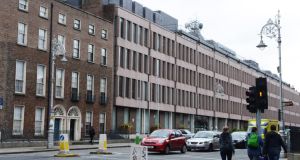 Almost 50 years since the demolition of 16 Georgian houses in what was described by conservationists as one of the worst acts of vandalism in the history of the State, the ESB plans to redevelop its headquarters on Dublin’s Fitzwilliam Street.

The company intends to knock the offices designed by Sam Stephenson and Arthur Gibney and apply to Dublin City Council for permission for a scheme double the capacity of the existing building.

However, it does not intend to comply with the council’s policy that it should restore the lost Georgian facades of the street.


Mansion House protest
Plans announced by the ESB in the early 1960s to break up what was Dublin’s longest Georgian facade, from Mount Street to Leeson Street, resulted in a resistance campaign which culminated in nearly 1,000 Dubliners attending a protest meeting at the Mansion House in 1962.

Dublin Corporation heeded the protests and refused permission for the demolition. But on September 30th, 1964, the day before the new Planning Act which established a national planning system came into force, Neil Blaney, then minister for local government, signed an order overturning the corporation’s decision. Protests continued but destruction of the 16 houses went ahead.

In the 1990s the ESB made an attempt at amends when it considered a plan, also by Stephenson, to re-establish the Georgian facade as a Millennium project. But this was deemed problematic and rejected.

The company, four years ago, announced its intention to rebuild its headquarters. Since that announcement a new city development plan was passed which gave councillors the opportunity to ensure the ESB would have to include restoration of the 16 facades in any new development on the site.

“This is the last opportunity to reinstate Fitzwilliam Street . . . Some effort should have been made by the ESB to reinstate the Georgian facade.”

The ESB conceded that its new design by Grafton Architects and O‘Mahony Pike Architects does not involve full facade reinstatement but said it “re-interprets” but “respects” the surrounding architectural heritage.

Background: Widespread opposition to ESB’s 1962 plan to demolish houses
The announcement by the ESB in 1962 that it planned to demolish 16 houses on Lower Fitzwilliam Street provoked widespread opposition from conservationists, but it also got some support from architectural students who wanted to see modernism enshrined in Dublin’s Georgian core.

Opponents included the new Irish Georgian Society, leading actor Micheál MacLiammóir and artist Seán Keating, who warned that “the next move will be to feed the books in the library of Trinity College to the boilers of the Pigeon House” – then an ESB power station.

Even Princess Grace of Monaco lent her support to the cause of preserving a key element of the longest and arguably the finest Georgian streetscape in the world, extending nearly 1km from the National Maternity Hospital on Holles Street to Lower Leeson Street.

The ESB was determined to go ahead and brought in the English architectural historian, Sir John Summerson, who blithely condemned the 16 houses as a “sloppy, uneven series” with no architectural coherence: “It is simply one damned house after another.”

Protest meeting
A protest meeting in the Round Room of the Mansion House in January 1962 was attended by 900 people, with 200 more turned away at the door.

It was picketed by two groups of architecture students carrying placards with such slogans as “Don’t make Dublin a museum”.

Quite responsibly, the ESB – which had started out in a drawingroom flat in one of the threatened houses – held an architectural competition for the project.

With 45 entries, it was won by then relatively youthful architects Sam Stephenson and Arthur Gibney.

What they proposed was a modern building, with a facade to Fitzwilliam Street carefully modulated to evoke at least the plot widths of Georgian houses. Nonetheless, it was abundantly clear that this would represent a significant rupture in Dublin’s “Georgian Mile”.

The ESB’s cause was helped by the collapse of two Georgian tenement buildings in Bolton Street and Fenian Street within weeks of each other in June 1963, resulting in the tragic loss of a pair of elderly people in one case and two children on their way to a sweet shop.

Dublin Corporation, as it then was, reacted with panic and began condemning old buildings on an unprecedented scale.

This was all grist to the mill for demolitionists. Just two days after the Fenian Street collapse, Stephenson argued that Georgian houses were “never intended to last more than a lifetime” and it should be clearly understood that “they cannot be usefully preserved at all”.

Ironically, several modern office blocks have since been demolished – lasting little more than a generation – while what survives of Georgian Dublin is still standing.

And Stephenson’s own ESB headquarters is facing demolition 44 years after it was completed.
Frank McDonald