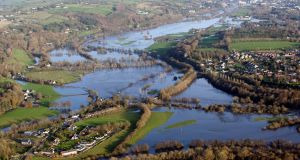 The ESB could face multiple legal actions to recoup an estimated €90 million insurance companies paid out over the Cork floods of 2009 after the High Court ruled it was substantially responsible.

Mr Justice Max Barrett ruled that the ESB, as the operator of the Inniscarra and Carrigadrohid dams in the Lee Valley, was 60 per cent liable for the estimated €20 million worth of damage caused to University College Cork property in the flood of November 19th, 2009.

UCC had brought the claim on behalf its insurer, Aviva, and although the college was found to be 40 per cent liable for the damage through contributory negligence, legal and insurance experts say the judgment opens the way for other insurers to sue the semi-State company.

According to claims specialist Eamon Downey of the Irish Claims Consultants Association, the ruling opens the way for other insurance companies to seek to recoup from the ESB what they paid out in damages for the Cork flood.

Both Mr Noonan and Mr Downey pointed out that the flood happened on November 19th, 2009, and that the statute of limitations, which prevents claims being brought after six years, does not expire until November 19th next, so claims for damages can still be lodged.

Mr Downey, whose company handled more than 900 individual cases arising from the flood, said many insurance companies would look at the High Court judgment and see it as paving the way for them to sue the ESB.

The court heard Aviva had paid out €34 million in damages arising from the flood and while some €20 million of this relates to damage in UCC, about €14 million relates to other claims made by its clients who suffered flood damage.

It is understood the hospital filed a claim for €1.2 million arising from the damage with Aviva. The insurance company has since lodged a claim for that sum with the ESB and was awaiting the UCC judgment before pursuing it.

Meanwhile, an ESB spokesman said it is insured by an international insurance company.