EirGrid upgrade to take up to four years

Company to begin €156.8m improvement of electricity network from Clare to Dublin 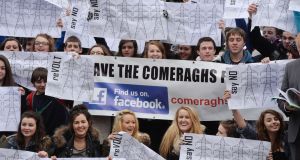 The State company, which operates the national grid, has scrapped plans to build 40m-high pylons carrying 400kV lines 220km across the country.

The decision follows years of opposition from communities across the south to the construction of pylons carrying high-voltage power lines. Anti-pylon groups had campaigned to have the lines installed underground.

However, that option would have cost more than €643 million and would have delivered similar capacity to the new upgrade solution, the company said.

“This shows we do listen to people. We are not a company that wants to build pylons for the sake of building pylons. We looked at the demand patterns and we saw another option.”

The preferred solution, known as the regional option, uses a technology known as “series compensation”. This involves fitting devices to the existing network lines to enable more power to flow through existing lines. An underwater cable across the Shannon estuary is also required in addition to some upgrade works to existing transmission lines.

The technology was used in the US on long-distance power lines, but this would be the first time it would be used in Europe, Mr Slye said.

“We identified the regional option in March of this year and means there is now no requirement to proceed with the previously proposed Grid Link 400 kV overhead line . . . Series compensation is a technology in use in California and other parts of the world on longer lines and will allow us to leverage the power of the existing grid.”

The plan which involves a cross-border network of pylons and high-voltage lines has also met with considerable local opposition, but Mr Slye said the series compensation solution would not be applicable.

“The absence of an existing network means that it cannot be strengthened,” he said.

For similar reasons the solution would not be suitable for use in the Grid West project.